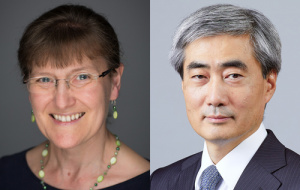 Katharine Ellis is a cultural historian of music in nineteenth- and early-twentieth-century France. Her research straddles musicology, history and French studies, and covers musical repertoires ranging from medieval plainchant to 20th-century modernism. She has written widely on music criticism, the history of music and education, women’s musical careers, opera and its institutions, and musical fiction. Two co-edited collections present new research on Berlioz and on music/text relations. Her monographs explore the historical press (Music Criticism in Nineteenth-Century France, 1995), the French early music revival (Interpreting the Musical Past, 2005), and the tangled web of Benedictine musical politics and Church/State relations c.1900 (The Politics of Plainchant in fin-de-siècle France, 2013). She is currently writing a book on French regional music from the 1830s to Vichy.

Professor Ellis was a Gray Instrumental Scholar at Univ (1982-1985), and pursued postgraduate violin study at the Guildhall School of Music and Drama before returning to Univ to pursue a DPhil on music criticism in nineteenth-century Paris. She won a Kathleen Bourne Junior Research Fellowship in French Studies at St Anne’s College in 1989, became a Lecturer in Music at the Open University in 1991, and moved to Royal Holloway, University of London in 1994, gaining a personal chair in 2006. From 2006 to 2009 she was inaugural director of the Institute of Musical Research and Deputy Dean at the School of Advanced Study, University of London, She became the Stanley Hugh Badock Chair of Music at Bristol in 2013, and moved in 2017 to Cambridge to become the first woman appointed as 1684 Professor of Music in the 333 years of the chair’s existence. She was elected to the Academia Europaea in 2010, the British Academy in 2013, and the American Philosophical Society in 2017.

She is awarded the Honorary Fellowship in recognition of her distinguished contribution to musicology, as well as her support for the College.

Hyun Song Shin is a South Korean economic theorist and financial economist who focuses on global games. He has been the Economic Adviser and Head of Research in the Monetary and Economic Department of the Bank for International Settlements (BIS) since 1 May 2014. He is a member of the Bank’s Executive Committee. He was a Tutorial Fellow in Economics at Univ from 1990 to 1994.

Before joining the BIS, Mr Shin was the Hughes-Rogers Professor of Economics at Princeton University. In 2010, on leave from Princeton, he served as Senior Adviser to the Korean president, taking a leading role in formulating financial stability policy in Korea and developing the agenda for the G20 during Korea’s presidency.

From 2000 to 2005, he was Professor of Finance at the London School of Economics and served as an advisor to Bank of England. He is a member of the Financial Advisory Roundtable at the Federal Reserve Bank of New York and a panel member of the US Monetary Policy Forum since 2007. He has been a Research Fellow of the Centre for Economic Policy Research since 1998 and was Chairman of the Editorial Board of The Review of Economic Studies from 1999 to 2003.

Professor Shin was elected a Fellow of the Econometric Society and of the European Economic Association in 2004, and a Fellow of the British Academy in 2005. He was awarded the R. K. Cho Economics Prize in 2009.

He holds a DPhil and MPhil in Economics from Oxford (Nuffield College) and a BA in Philosophy, Politics and Economics (Magdalen College). Professor Shin is author of numerous publications in the fields of monetary policy, banking, finance and issues related to financial stability.

He is awarded the Honorary Fellowship in recognition of his outstanding contribution to the study of international economics and to its application in public policy settings.