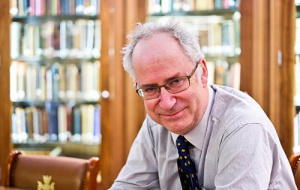 We are delighted to announce that Professor Sir Simon Wessely (1978, Medicine) has accepted an Honorary Fellowship at Univ. The Fellowship is bestowed in recognition of his distinguished contribution to psychiatry and military health care as a teacher, research scientist and policy advocate.

Sir Simon is Regius Professor of Psychiatry at King’s College London and a Consultant Liaison Psychiatrist at King’s College and the Maudsley Hospital. His research interests include the ways in which populations react to adversity, military health and unexplained symptoms and syndromes.

After studying medicine at Trinity Hall, Cambridge, Sir Simon finished his medical training at Univ, graduating in 1981. He obtained his MRCP in Newcastle, before moving to London to train in psychiatry at the Maudsley Hospital.

Over the past few decades, Sir Simon has established the King’s Centre for Military Health Research (previously the Gulf War Illness Research Unit), Chronic Fatigue Syndrome Research Unit and co-founded the Cochrane Depression and Anxiety Group. He was the Chair of the Government’s Independent Review of the Mental Health Act. He has published books on chronic fatigue syndrome, randomised controlled trials and the history of military psychiatry and he is a regular guest on radio and TV discussing developments in medicine.

Sir Simon will receive an honorary degree from the University at this year’s Encaenia on Wednesday 26 June.

The nature of nonsense