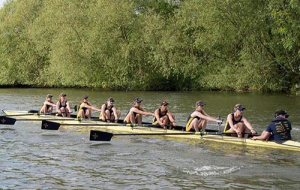 This year’s Summer Eights saw four women’s boats and two men’s boats from Univ race on the river, from Division 6 up to Division 1. Here is an overview of how each boat did across a fantastic four days of rowing, with one boat narrowly missing out on Blades and another on Spoons.

W4 began in Division 6 bumping St Anne’s College on the first day of Summer Eights. Unfortunately their race on Day 2 was klaxoned so they did not have enough time to bump. They rowed over on the last two days of racing. W3 bumped Queen’s College on Wednesday but also fell victim to the klaxon on the second day, missing out on another bump. However, W3 bumped Green Templeton College W3 in only 11 strokes and bumped yet again on the final day.

Day 1 of Summer Eights saw M2 closing on Wadham M2 in Division 3 but they rowed over and were then bumped on Thursday by a Blades-hopeful St Edmund’s Hall M2. Univ M2 were then bumped by Linacre M1 on the penultimate day of racing, and again by Green Templeton College M1 on Saturday.

W1 were chasing Christ Church W1 for the first two days- they overlapped with them on the first day but ran out of river for the bump. On the penultimate day of Eights, W1 triumphantly bumped Christ Church W1 and, having rowed over on the final day, will now start at bungline 4 in Division 1 next summer.

Congratulations to all the rowers for a magnificent effort and thanks to all the supporters who came down to watch and cheer them on!

Congratulations to all who ran…