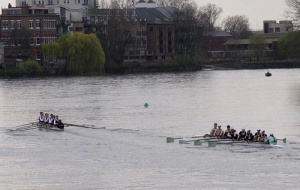 Nick Ryan (2018, Mathematics) rowed in the University’s victorious Lightweight boat on Sunday 23 March. Here Nick writes about how he found the experience and the challenges up ahead.

“After five years of rowing at school, I joined the Oxford University Lightweight Rowing Club in September and it has been great fun so far! Despite being the only fresher, the guys have been really welcoming and have helped to make the training never seem like a chore. For the first time in its 45-year history, the Lightweight Boat Race was help on the Championship Course on the tideway in London, instead of in Henley as it was for the previous years.

“For us this move meant multiple weekends away in London to train on this stretch and a much longer – 6.8km – race to prepare for. Come race day we were lucky to have relatively flat water and great support throughout, so despite Cambridge taking an early advantage, we managed to pull away in the second half of the race to win by a verdict of 2 and a quarter lengths. This victory was made especially sweet as the last time Oxford won the Lightweight Boat Race was in 2013! In the subsequent awards ceremony, the scale of the achievement really hit home with a huge number of alumni attending – including six of the original 1975 crew.

“Now the focus of the season moves onto BUCS regatta in early May, where winning a medal would earn us a full blue. From there we split up into our colleges to race in Summer Eights but we will be joining up again to enter Henley Royal Regatta at the start of July. The hope is that we will be able to carry our momentum through the summer racing season and onto next season to try and beat Cambridge again.”