Members of Univ past and present gathered in The Butler Room on Thursday 4 October for a drinks reception, to wish Head Porter Bob Maskell all the best for his semi-retirement after 12 years of dedicated service to the College.

The Master gave a speech in which he described Bob as,

“The eyes and ears of Univ. He gave the security of the College, and all who worked and studied in it, the same unswerving priority that he gave to the VIPs he cared for in his previous life. 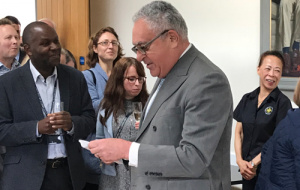 “Bob has been uniformly helpful. A true support to everyone. Whatever the problem – Bob has always sorted it out.

“In his application for the position Bob Maskell wrote that he had always wanted to be the Head Porter of an Oxford college. It was true and it showed. He loved Univ: he was part of it, proud of it, and promoted it.

“We pride ourselves as a College for being friendly, welcoming and loyal. Bob has been the very spirit, the very essence, of the College.” 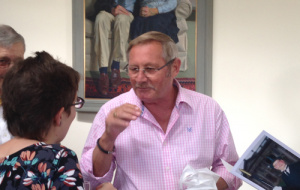 “I have really enjoyed my twelve years here at Univ. Those that know me will know that I live and breathe Univ. It had always been my ambition to become a head porter once I retired from the police, because I worked at so many different colleges over the past twenty years. I have taken a lot of VIPs around Oxford. I want to thank the Master, the Fellows, all the staff and the students. We must not forget the students because, after all, they are why we are all here.

“I would also like to say a really big thank you to our sometimes unsung heroes – the porters who work in University College. They do a good job and I thank them for their hard work and loyalty.” 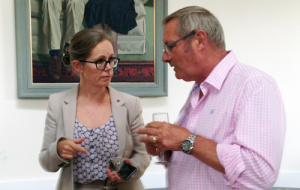 Continuing a long tradition, the College in 2006 recruited Bob from the uniformed services. He had spent fourteen years in the Royal Corps of Signals, with spells in Germany and in Northern Ireland where he was attached to the Army Bomb Disposal Unit, and twenty years in the Thames Valley Police. After a few years on the beat, he became a Protection Officer assisting with the secure transfer of prisoners and then progressed to leading a Close Protection Unit with special responsibility for royalty, senior politicians and VIPs.

Bob will be sorely missed by students, Fellows, staff, Old Members and tortoises alike. We wish him all the best in his future endeavours.