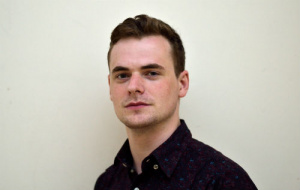 The play is a trite but satirical love story following one British man’s search for love through a Russian “mail-order-bride” website. It was performed in the Burton Taylor studio in 5th week as part of the OUDS Cupper’s competition. Jack wrote the play a scene a night for a couple of weeks during rehearsals. He also directed it and David Daisie helped with tech.

Originally from Essex, Jack Clover is a member of the National Youth Theatre and took the first play he wrote “The Match Game” to the Underbelly at the Edinburgh Fringe in August after it was one of the runners up in the National Theatre’s New Views young playwriting competition in 2013.