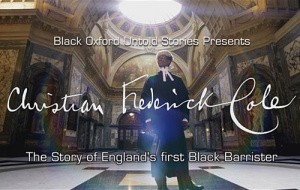 A film celebrating the life of Christian Cole will be screened at Univ on Wednesday 29 January. Cole, from Sierra Leone, was the first Black African to take a degree from Oxford.

The film was written, produced and directed by Pamela Roberts, FRSA, the founder and director of Black Oxford Untold Stories. Roberts said, “I am delighted to be able to bring Cole’s story to life to illuminate a previously untold story.”

Cole was born in 1852 in Waterloo, Sierra Leone and enrolled at Oxford as a non-collegiate student in 1873 to read Classics. He received an income from his uncle, which he supplemented with teaching music, Responsions (the first exam once required for an academic degree at the University), and preparation for students’ divinity exams. When the income from his uncle stopped, Herbert Gladstone, an Old Member of the College, along with others including the Master at the time, George Granville Bradley, worked to ensure he could stay.

Christian Cole achieved a fourth in Greats, becoming the first Black African to achieve a degree from the University of Oxford. In 1877, he became a member of University College, and in 1879, a member of the Honourable Society of the Inner Temple. He was called to the Bar in 1883, becoming the first Black African to practise Law in English Courts.

In 2017, a plaque was unveiled in Logic Lane to celebrate Christian Cole. Pamela Roberts suggested the idea as part of her work with Black Oxford and worked with Angela Unsworth, Domestic Bursar, and Archivist, Dr Robin Darwall-Smith, to bring it about. Pamela has worked hard to raise the profile of pioneering black scholars like Cole, both through her work at Black Oxford and her book Black Oxford, The Untold Stories of Oxford University’s Black Scholar.

The screening will start at 6pm and finish at 8pm with a Q&A. You can register for the event online.