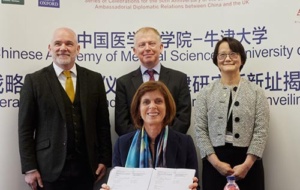 Oxford University and the Chinese Academy of Medical Sciences (CAMS) signed a cooperation agreement at a virtual unveiling ceremony of the CAMS Oxford Institute at the end of April. Professor Louise Richardson, the Vice-Chancellor of the University of Oxford, and Chen Wang, CAMS President, signed the agreement on behalf of their respective organisations.

Chinese Academy of Medical Sciences Oxford Institute is China’s first medical sciences institute in the UK hosted by the University of Oxford, a collaboration between the Chinese Academy of Medical Sciences (CAMS) and the University. The new institute builds on the CAMS Oxford International Centre for Translational Immunology (CTI), established in 2013 under the direction of Professor Xuetao Cao, and will expand and develop existing successful collaborations between the two organisations and countries.

A new genetic study of the bacteria…

In the first of a new series of…