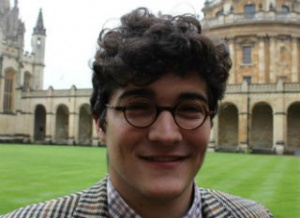 Scientists from the University of Oxford, including Univ Junior Dean Antone Martinho, have shown that newly hatched ducklings can readily acquire the concepts of “same” and “different” – an ability previously known only in highly intelligent animals such as apes, crows and parrots.

Ducklings and other young animals normally learn to identify and follow their mother through a type of learning called imprinting, which can occur in as little as 15 minutes after hatching. Imprinting is a powerful form of learning that can allow ducklings to follow any moving object, provided they see it within the species’ typical “sensitive period” for imprinting.

In this new study, published in the journal Science, ducklings were initially presented with a pair of objects either the same as or different from each other – in shape or in colour – which moved in a circular path. The ducklings therefore ‘imprinted’ on these pairs of moving objects before being tested for their preferences between different sets of objects. In these subsequent choice tests, each duckling was allowed to follow either of two pairs of objects composed of shapes or colours to which the duckling had not previously been exposed.

Univ Junior Dean Antone Martinho, a doctoral student in Oxford’s Department of Zoology and the study’s first author, said: “While it seems surprising at first that these one-day-old ducklings can learn something that normally only very intelligent species can do, it also makes biological sense. When a duckling is young, it needs to be able to stay near its mother for protection, and an error in identifying her could be fatal.

“Ducks walk, swim and fly, and are constantly changing their exact shape and appearance as they extend their wings or become partially submerged, or even change angle with respect to the viewer. If the ducklings just had a visual “snapshot” of their mother, they would lose her. They need to be able to flexibly and reliably identify her, and a library of concepts and characteristics describing her is a much more efficient way to do so, compared with a visual memory of every possible configuration of the mother and her environment.

“Still, this is an unexpected feat for a duckling, and a further reminder that “bird-brain” is quite an unfair slur.”

A copy of the paper can be obtained via the journal at scipak@aaas.org