At the heart of power 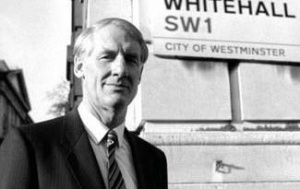 Univ OM Michael Jago (1965, Ancient History and Philosophy) has recently published a biography of Robin Butler, Master of Univ from 1998 until 2008.

The book spans Lord Butler’s career, following his journey from Univ as an undergraduate to the very top level of the Civil Service. Lord Butler served as Cabinet Secretary, Head of the Civil Service, during the governments of Thatcher, Major and Blair, before returning to Univ as Master. Perhaps most famously, he directed the inquiry into the intelligence surrounding Iraq’s weapons of mass destruction in 2004.

The book is noteworthy for studying the life of a figure so recently involved in public life. During the process of writing, Michael found Lord Butler himself to be an invaluable source of information: “Once Robin had agreed to the biography, he offered me the manuscript of a family memoir he was writing, together with a treasure trove of his papers – everything from school reports and undergraduate essays to correspondence with colleagues in the Civil Service and as Master of Univ.”

Michael explains that his subject’s candid approach proved exceptionally useful in forming a narrative through his writing: “His generosity with his time was amazing; both his willingness to express frank opinions of forty years of politics and of politicians, and his candour in evaluating his own actions were remarkable and invaluable to my developing an accurate tableau of his career.”

Michael has also written biographies on Rab Butler and Clement Attlee, but found the process of writing the life of a living subject particularly rewarding: “I had derived great satisfaction from Clement Attlee’s grandson’s reaction to my biography of Clem; sources close to subjects of my other biographies had been positive about those books. But this was the first time that my subject had been able to pronounce judgment himself.” To his great relief, Lord Butler, who had volunteered to fact-check the manuscript, offered his approval of the end result.

More on Biteback Publishing at www.bitebackpublishing.com and on Twitter @BitebackPub