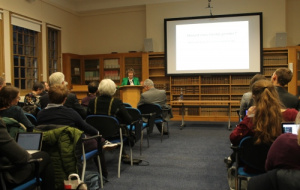 “Professor Alison Wolf is a professor at King’s College London and also sits as a crossbench peer in the House of Lords, specialising in the relationship between education and the labour market. In February 2018, Professor Wolf was appointed to the Government’s Review of Post-18 Education and Funding alongside Univ’s own Master, Sir Ivor Crewe. In the opening remarks of the evening, Sir Ivor nodded to Professor Wolf’s willingness to challenge longstanding orthodoxies in her line of work – the lecture that followed testified to that account.

“Work to Widen ‘Access’ to Higher Education as we understand it, stressed Professor Wolf, ought to be aware of continuing changes in our society. It is in this vein that Professor Wolf asserts that it is misleading and outdated to treat gender in isolation, as a marker for disadvantage. If we insist on doing so do we just ignore the biggest inequalities?

“Wolf noted that on one hand, women can be seen to fare well in contemporary society. Statistical evidence, for instance, shows that women account for half of the approximate 15-20% of the population that inhabit two-career, two-high income couples and families, as well as single professionals in developed countries. Furthermore, 50% of Class 1 jobs held in OECD countries (2000) were also held by women. In addition to this noted Wolf, women are the majority of university students everywhere, consistently outperforming men in number since 2013 – a trend replicated in a number of OECD countries. In addition to this, average returns – that is to say how much graduates earn compared to non-graduates – are much higher among women than for men.

“However, Wolf was keen to stress sensitivity to nuance in the female labour market. The mere fact that female graduate returns are higher according to the Institute of Fiscal Studies, does not warrant a dismissal of gender as an important category through which we should seek to address inequalities. It transpires, for example, that the greater earnings premium for female graduates is largely a function of the very low pay of female non-graduates: women dominate the low-paid ‘low-productivity’ sectors, meaning that life for non-graduate females remained significantly less advantaged. Inequality among women, noted Wolf, is growing faster than inequality among men. It is the nature of women’s work, for example, occupation choice and the tendency of women to engage in part-time work, that results in women on average earning less than their male counterparts.

“How then do we address this inequality? The Higher Education institution that an individual attends is critical to determining their social mobility. Wolf also asserted that young people’s relative chances of attending elite institutions – those places most likely to correlate with higher graduate earnings – are strongly associated with their class of origin. Therefore, in seeking to address the inequalities present in our society, and particularly should we wish to help those who are the most disadvantaged, Professor Wolf argues that we ought to revise our strategy.

“For Professor Wolf, it is no longer suitable to establish targets such as those set by the 30% Club, where 30% of all corporate board positions are held by women, or the 33% non-statutory target for women set by the UK Government – Investment Association on FTSE 350 boards. What we need to focus on instead is enabling social mobility for those who have fallen foul of class-based inequalities, such as the ‘poorest adults with the lowest qualifications’ who, according to the Social Mobility Commission of January 2019, ‘are the least likely to learn new skills’, or the findings by UCAS and HESA that revealed a 38% drop in the number of students aged 25-29.

“Among members of the audience, there was slight scepticism. Members expressed concern that Professor Wolf’s conclusions too greatly dismissed the work needed to reduce gendered inequalities within universities, and others – pointed out that even more consideration ought to be paid to the intersectional nature of challenges posed to access – suggesting that in reducing the issue of access to be a matter of class alone, or to suggest that class alone was the most significant factor to be considered – would be to ignore other significant factors.

“Whether or not one agrees with Professor Wolf’s view, what remains clear is that the ways in which we consider Higher Education access, and the ways in which we seek to tackle barriers to it, remain complicated and dynamic in nature. In turn, we must persist in our endeavours to understand it, and remain committed in our efforts to create a more socially mobile and just society.”

If you would like to listen to the lecture, a recording is now available on the University’s website.

Univ triumphed at the cycling Cuppers…

The race to zero