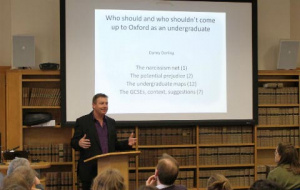 Univ’s 8th Annual Access Lecture took place on 8 May 2017, with Professor Danny Dorling presenting “Who should and who shouldn’t come up to Oxford as an undergraduate?”

Danny Dorling is a Professor of Geography at Oxford and a Fellow at St Peter’s College. In Univ’s 8th Annual Access Lecture, his expertise as a social geographer concerned with the geographical structure of social inequality, was brought to bear on the hot topic of the Oxford admissions process.

Professor Dorling’s lecture explored how the University’s aim to admit the best students – passionate and hardworking individuals who excel academically – is complicated by socio-economic inequality in our society. His lecture also used social geography to gesture towards ways in which Oxford outreach could be made more effective in this difficult context.

Dorling’s first points dwelt on language: the language that the University uses to introduce itself to potential applicants (see www.ox.ac.uk/study) creates what Dorling labelled a “narcissism net”, appealing to those who self-identify as “the best and brightest” who “like to think for (themselves)”.  Do all good students necessarily see themselves in this way? It is likely that many who would be suited to Oxford simply don’t apply.  Also, some students who do apply do so for the wrong reasons – to meet expectations rather than out of commitment to study their subject.

Another way in which Dorling argued that language has been problematic in Oxford admissions is in the way the word “potential” has been used and abused. The two criteria used when choosing candidates are a) assessment of their academic achievement so far, as represented by standard exams and b) assessment of their potential. Dorling traced the problematic use of the term “potential” within education back to Aldous Huxley in the 1960s, who referred to the belief in reference to the belief that humans use less than 10 percent of their brains and that science might find a way to access this unused potential. Given that scientists are yet to find any way to increase this usage, Dorling argued that viewing people as having fixed potential, an idea prevalent in the discourse on education in this country, fosters a flawed approach to selecting and supporting students. What do we think this “potential” constitutes?

Professor Dorling went on to present a series of striking cartograms. For his non-geographer audience, he explained how each map was stretched so that individual applicants were represented by the same sized area, producing a great swelling around the London area and a huge reduction in the size of areas in the West and North of England, and in Wales. This was a great way to represent visually just how different the number of applicants is from each region. Professor Dorling did concede that improvements are being made by the access schemes run by the University, as shown by the increase in applicants from East London between 2009 and 2012; however, the pattern is still far from proportional to that of the physical map of the UK.

Dorling took care to contextualise these maps by also mapping geographically the students capable of meeting the A Level entrance requirements for Oxford. Oxford East contains more children than Oxford West and Abingdon, but the number who achieve at least AAA at A level in Oxford West is almost double that of Oxford East. The mapping of the AAA+ landscape throughout the nation showed that those living in areas around London get better grades on average, whereas those in other regions do worse. Even after adjusting for both population and attainment differences, however, places at Oxford in 2015 were gained in strikingly greater numbers by students from London and the South. From 2010 to 2015 only 15-25 percent of students from the North and Wales who achieve AAA+ applied to Oxford, whereas in the South, 30-35 percent applied.

Throughout his lecture, Professor Dorling recognised the important role Oxford’s existing access work plays in encouraging capable individuals to apply who may be unsure due to perception of the university. The outreach work of the University aims both to encourage schools from more deprived areas to visit Oxford, and to travel to such schools and talk to students face to face. Professor Dorling’s altered maps, however, enabled him to challenge the success of particular initiatives. A key consideration here is the impact of bursaries. The home locations of students in receipt of bursary support were dotted onto the map. Although financial support is important for those from more deprived areas, bursaries have not necessarily fulfilled their intended purpose; they do not seem to have attracted significant numbers of those students who tend not to apply.  Zooming in on the Midlands, Dorling showed a surprising lack of dots in the centre of Birmingham. In the outer regions of Birmingham – in slightly better off areas – dots representing students in receipt of higher bursaries came very close to dots representation students from the higher income backgrounds. It is not easy to understand why better off areas should attract more bursaries, but Dorling suggested that it might well be because some better off students suffer an artificial reduction of income, such as parental divorce, in the run-up to application. Put differently, we cannot assume that these bursaries always go to students who have experienced long-term deprivation.

Progress is being made in making this university accessible for all. Without the hard work and effort of all the Colleges, there is no doubt that the situation would be very different indeed. Professor Dorling’s talk provided an interesting chance for those directly involved in university admissions and outreach, as well as a number of interested parties outside the University, to consider who should and shouldn’t come up to Oxford.

With thanks to Cat McEnhill, JCR Access and Equal Opportunities Rep for the report.