In this second glimpse into Univ’s collection of the books and papers of Erich Alport (matr. 1926), we turn to two figures with strong Oxford links, the Oxford don Nevill Coghill, and Univ’s great twentieth-century poet Sir Stephen Spender.

Nevill Coghill (1899-1980) was English Fellow of Exeter College from 1925-1957, and then Merton Professor of English from 1957-1966. The Alport papers contain more letters from Coghill than any other correspondent, which suggests the depth of their friendship. Coghill is perhaps best known today for his translations of Middle English literature, especially Chaucer’s Canterbury Tales, which was published by Penguin Classics in 1951, and was for many years the most popular rendering of Chaucer into modern English. 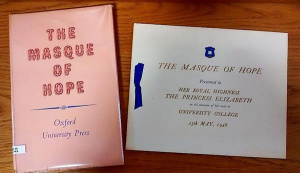 The script and programme printed to mark the performance of The Masque of Hope in 1948. Coghill sent Alport a copy of the script

Coghill has a special link with Univ, because in 1948 he co-authored The Masque of Hope, a pageant performed in Radcliffe Quad in honour of Princess Elizabeth during a visit to Oxford (the Princess next visited Univ, now as Queen Elizabeth II, in 1999). The Masque is a short but ambitious piece, incorporating elements of medieval outdoor tournaments as well as the masque form. Popularised in the sixteenth and seventeenth centuries, masques were allegorical plays that relied heavily on opulent scenery, costumes and choreography: as Ben Jonson once sarcastically remarked, “Painting and carpentry are the soul of Masque” (Coghill 1948: 5). They were traditionally performed indoors, providing a comfortable setting for an evening’s entertainment and paving the way for the invention of theatres in Stuart times. 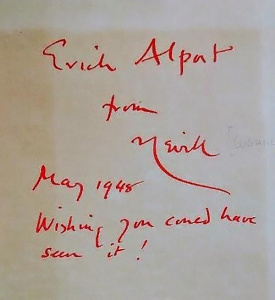 According to producer Glynne Wickham, the last time that such a spectacle was put on for royalty in Oxford was during Charles I’s visit in August 1636 (Coghill 1948: 6). It is understandable, then, that The Masque of Hope attracted University-wide interest and involvement, with the majority of the actors and almost half of the backstage crew coming from Colleges other than Univ. No effort was spared to create a visual extravaganza; the hand-printed programme includes a long list of thanks to local companies who agreed to lend such unusual props as a horse, a flock of pigeons, and a suit of armour.

Univ Library owns a couple of copies of Coghill’s script, which was published by OUP to mark the occasion. Evocative bonuses in the published version are Osbourne Robinson’s striking costume designs and producer Glynne Wickham’s fantastical drawings of the set. However, the copy that Alport donated is particularly special thanks to its handwritten inscription by the author. “Wishing you could have seen it!” Coghill has written excitedly in red pen, showing his pride at the success of his literary creation. 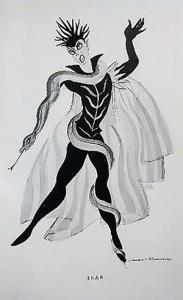 In addition to his writings, Coghill was a highly regarded theatre producer, putting on many plays and some operas in Oxford, culminating in 1966 with a production of Doctor Faustus, starring Richard Burton (whom he had taught) and Elizabeth Taylor. In the following year, he and Burton co-directed a film version of the play. Coghill did also do some work in London, as when in 1951, he directed at Covent Garden the world premiere of Ralph Vaughan Williams’s opera The Pilgrim’s Progress, although this was not a success (Vaughan Williams’s ODNB entry even calls the production “insultingly half-hearted”).

The two letters shown below discuss these two different projects. This first letter (UC:P110/C12/7) is dated 30 April 1951, four days after the premiere of The Pilgrim’s Progress, which Alport and his mother attended. Here at least, Coghill is happy with his work, noting that Vaughan Williams had thought the production “quite beautiful”, and declaring that he doesn’t much mind “the rather scornful treatment of the production” by some critics. He goes on to discuss what he hoped to achieve in the production – no “Piperian hanky-pankies”, but rather “a return to straight objective naturalism”. 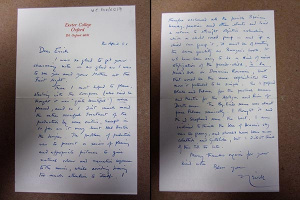 The second letter (UC:P110/C12/18) is dated 31 December 1965, and discusses Coghill’s work on the forthcoming production of Doctor Faustus. However, Coghill also writes enthusiastically about A Hundred Camels in the Courtyard, by Paul Bowles, whose friendship with Alport was discussed last month. Evidently Alport lent Coghill his copy of this book, for it was found there over thirty years later. 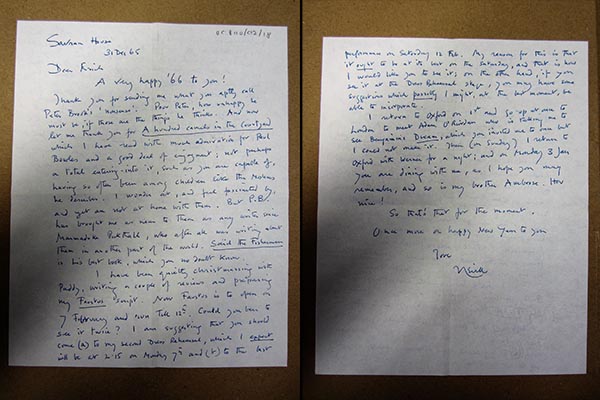 Sir Stephen Spender (1909-95) is the one member of this trio who is an Old Member of Univ, coming up in 1927 to read PPE. A self-confessed aesthete living in a rather “hearty” College, Spender did not enjoy his time at Univ, writing about it to pungent effect in his autobiography World within World (1951), and he failed his Finals.

Alport had gone down from Univ just before Spender came up, but several things must have drawn them together. In particular, while an undergraduate, Spender travelled regularly in Germany, and so would have stood out for his understanding of Alport’s native land. Alport and Spender became close: indeed some of Alport’s letters held in the British Library suggest that Alport fell in love with Spender, but Spender did not return his affections. Something of this turbulent relationship is reflected in Spender’s early autobiographical novel The Temple (not published until 1988). Alport was so upset by similarities between himself and the lovesick character Ernst Stockman that he threatened to sue for libel; this altercation, along with the novel’s explicit scenes of homosexuality, resulted in a publication delay of decades.

Univ Library is highly fortunate to own a distinguished collection of Spender texts. Some were generously donated by Spender himself, but the majority of what we have comes from Alport. 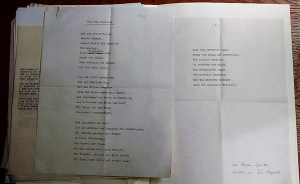 Spender’s self-translation into German of “What I expected”, corrected by Alport

Perhaps the most exciting Spender-related items that Alport acquired are the original typescripts of six poems composed before the Temple rift. Two of the typescripts (“The faces of living friends I see on water” and “Souvenir de Londres”) have abandoned, unfinished versions on the reverse side, allowing scholars to glimpse Spender’s drafting process. Two others (“Because I love you so” and “What I expected”) are accompanied by German self-translations, indicating how seriously Spender took his immersion in German culture. The “What I expected” translation (“Was ich erwartete”) has been corrected in places by a helpful Alport.

Alport’s collection of Spender’s published books starts with the rare first edition of Spender’s 1930 debut Twenty Poems (thought to be number five of only seventy-five copies) and assiduously follows the writer’s career until Alport’s death in 1971. It is interesting to trace the evolution of their relationship through the handwritten notes in the books. The revised edition of Twenty Poems, for example, contains the following inscription: “For Erich. Signed with best wishes in Hamburg, 1930, Stephen Spender.” This was at a time when Spender was starting to distance himself from Alport’s unrequited passion, but the direct address, added in pencil, indicates that they were at least still on speaking terms.

Most of the books from the later 1930s, 40s and 50s are autographed by Spender, but there are no more personalised notes to Alport for thirty years. Many of these middle-period books come with messages from other friends of Alport’s, implying that after the fall-out he relied on the generosity of intermediaries to feed his interest in Spender’s work. One such message, from an unknown friend called Leslie in the 1958 edition of Inscriptions, is shown here. The impersonality of the Spender signature and the time of year that Leslie was writing strongly suggest that this was a Christmas gift organised by Leslie, rather than the result of direct contact between Alport and Spender. 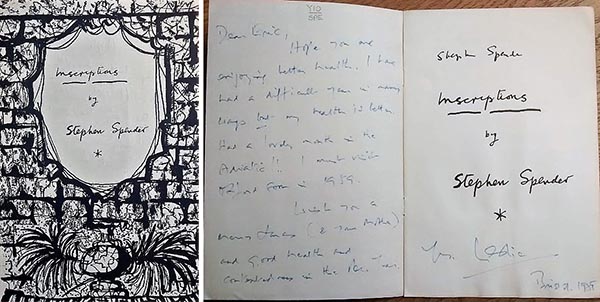 Alport’s copy of Inscriptions, with note by his friend Leslie. Spender’s autograph is at the top of the title page

One book that was not signed by Spender, but is historically evocative, is Spender’s 1939 translation of Federico García Lorca’s poems. Spender actively supported the liberal Republican side in the Spanish Civil War, and met his first wife, a Spaniard named Inez, at an Aid to Spain event in Oxford. Alport’s copy of the Lorca translation is, on the one hand, a poignant reminder of how precarious life was for Spanish writers and artists under the fascist General Franco: the inscription to Alport is from Lorca’s close friend, the painter Gregorio Prieto (1897-1992), who made a timely escape to Britain, but Lorca himself had already been executed by the time the book was published. 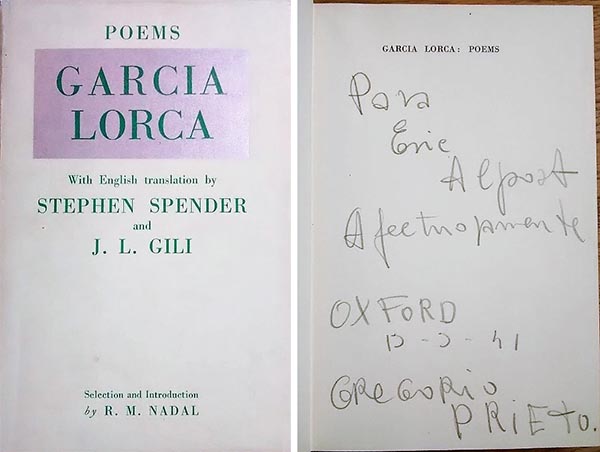 Also tucked inside the book was a letter in English to Alport from Spanish literary translator RM Nadal (1903-2001), another escapee who wrote the introduction to the volume. The letter addresses Alport as a good friend and suggests meeting up in Oxford. Sadly, no further evidence of Alport’s Spanish connections remains in the collection, but the inscription and the letter do give an example of how closely his and Spender’s circles of acquaintance overlapped. It was perhaps inevitable that the two would eventually be brought back together. 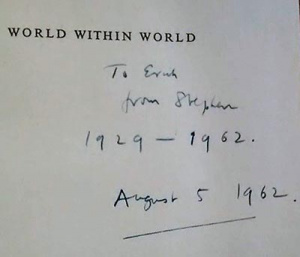 In 1962, we find another inscription directly from Spender to Alport, in Spender’s autobiography World Within World: “To Erich from Stephen 1929-1962. August 5 1962.” In an understated but touching way, Spender seems to be acknowledging that their friendship has emerged from the rough patch.

Very few letters from Spender to Alport are preserved in the Univ archives, but they include these two short notes below from 1962 (ref. UC:P110/C30/2-3), which reinforce the impression that by then they were on happier terms. 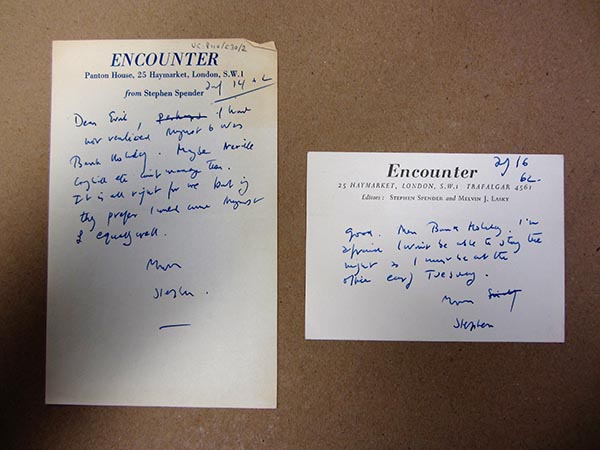 We hope you have enjoyed this two-part exploration of some of the highlights of the Alport Collection. If you would like to know more about the rarities that Alport acquired, you can find further details on the Alport Collection blog and in our A poem for Christmas Treasure from December 2014 Treasure. Look out for future Treasures too…

Note: The copyright holders for the Coghill and Spender materials photographed above have been contacted.

As the Library’s Spender and Coghill collections are relatively large, only the items referred to in the above article are listed here. Details of all the other books can be found on UnivCat.

Available in the Alport Collection:

Available from other locked collections upon request:
KCA/SPE: Spender, S. (1930), Twenty Poems. Oxford: Blackwell.
KCS/COG: Coghill, N. (1948), The masque of hope [presented for the entertainment of HRH Princess Elizabeth on the occasion of her visit to University College, 25 May 1948 with Programme]. Oxford: Oxford University Press.
YIO/SPE: Spender, S. (1988), The Temple. London: Faber & Faber.

The ODNB entry for Ralph Vaughan Williams, cited in the above article, can be read in full at doi.org

Alport was born in Posen…