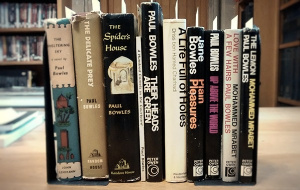 Dr. Erich Adolph Alport (1903–72) was born in Posen, Germany, and first went to the University of Heidelberg, before matriculating at University College in January 1926. According to the Tutorial lists of this time, he spent just two terms here, doing research in Political Science in Hilary Term, and in Trinity Term doing research in English History. He settled in England not long after. An obituary of him in the 1972 edition of the University College Record (p. 187), quoting from the Times, says:

“Inconspicuously Erich put his special talents to the service of England in war and peace. An international liberal in outlook, he took seriously his membership of Chatham House. He was a tireless traveller, curious about his fellow men and their varied cultures. Latterly he made a speciality of the Berber tribes of North Africa, studying their history and habits, collecting material for his lectures and planning a monograph … Though he dwelt much in the past, he had a sharp eye for new talent. He was a lover of all the arts, his taste in music, literature, painting and sculpture being as fastidious as his choice of friends.”

Alport kept in touch with his old Oxford College, and on his death in 1972, his personal library was bequeathed to the Library of University College. The collection consists of approximately 1050 books – many of which are signed by the authors – plus 85 periodical issues. It is an invaluable resource for anyone interested in early 20th-century authors, and spans the international literary scene, from Britain to the USA to Continental Europe and North Africa. All of the items can be called up for reading within the Old Library.

The main body of Alport’s papers have ended up in the British Library (refs. Add MS 74771 A–B and Add MS 74997–74999), which were acquired in two instalments in 1999. However, Alport evidently liked to keep some letters from his eminent friends and correspondents within his books, and so these found their way to Univ when those books were given to us. Gradually these letters have been extracted (with notes taken, where possible, of where they were found), and transferred to the archives. A catalogue of all the Alport Papers can be found here.

For the next two months we thought that we would link up some of books written by writers whom Alport knew well with letters written from them to him. 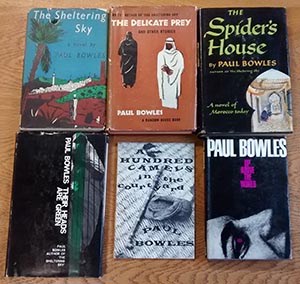 For June we concentrate on the novelist and composer Paul Bowles (1910-99).

In 1978, Paul Bowles’ short stories were described by Gore Vidal as ‘among the best ever written by an American’ (Bowles and Vidal: 1978). Bowles’ gripping tales of seduction and intrigue in foreign lands were mostly written in the 1940s, 50s and 60s, but their appeal to readers has easily survived the ensuing years, and they remain high in critics’ estimation today.

Bowles was not only a short-story writer: he also produced four fast-selling novels, a multitude of musical compositions, and translations from French, Spanish and Arabic. Born in New York in 1910, he grew up aiming to follow in the footsteps of his favourite author, Edgar Allan Poe, by studying at the University of Virginia. However, at age nineteen, a yearning to travel overtook him. He bought a boat ticket to Europe without telling his family or friends, and set off on a nomadic adventure that would not cease for decades. 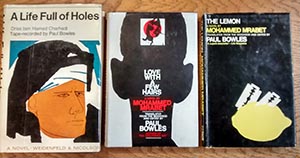 For several years he toured Europe and North Africa with his music tutor, the composer Aaron Copland. Then, in 1937, he married the successful novelist Jane Auer and together they explored Latin America, Asia and more of Africa. They developed a fascination with Morocco and bought a house in Tangier to use as their base. Sadly, Jane’s ill-health from the 1950s onwards meant that the couple’s lifestyle slowed down, but Paul retained his cosmopolitan connections, and ploughed his love for foreign cultures into publishing the translated stories of Moroccan and Latin American friends. Although he and Jane both maintained homosexual relationships alongside their marriage, they were always fond and supportive of one another. 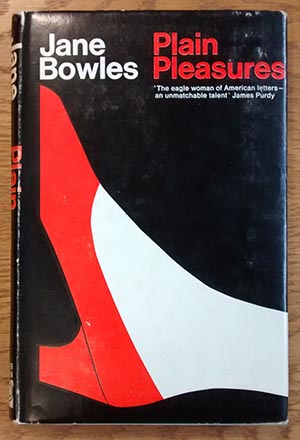 Book by Jane that Alport owned

Bowles corresponded widely and was known to many of the most illustrious literary figures of his era, including Tennessee Williams, Allan Ginsberg, Jack Kerouac, and Truman Capote. It is difficult to be certain how he first came across Alport but, judging by the dedication in Bowles’ translation of Mohammed Mrabet’s The Lemon (‘for Erich Alport after 39 years of friendship, Paul Bowles I/VI/70 Tangier’), one can assume they met around 1931. At that time, Bowles was residing in Berlin with Aaron Copland and socialising regularly with Stephen Spender and Christopher Isherwood, both close friends of the German Alport. It seems likely he could have been introduced to Alport by one of them.

Alport’s collection of Bowles’ books is a delight for any Bowles enthusiast. Six of the nine volumes are true first editions, and the other three are very early printings. The rare 1949 second impression of the first edition of The Sheltering Sky (Bowles’ most famous novel, which stayed on the US bestseller lists for eleven weeks) is a particular highlight. Univ is one of only three UK libraries that hold this printing, and copies for sale are relatively hard to come by. With its colourful dust jacket and well-preserved pages, it is lovely to hold and read. 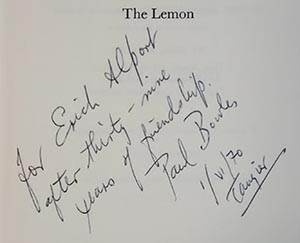 Dedication in Mohammed Mrabet’s The Lemon

However, the truly unique items are the books that Bowles dedicated personally to Alport. The 1967 first British Commonwealth edition of Bowles’ final novel, Up Above the World (a thriller set in Central America), bears the following inscription: ‘for Erich (a bit of contemporary Gothic to read in bed.) Paul Tangier, 5/II/68’. The informality of the phrase in brackets conveys the sort of bookish conversations the two might have enjoyed. The other dedication, in The Lemon, mentioned above, cements the durability of their relationship, showing how the genuine affection that Alport inspired nourished an irreplaceable personal book collection.

The first letter from the archives shown here (ref. UC:P110/C6/7) is dated 22 March 1958, written after the appearance of Bowles’s novel The Spider’s House. At the time, there was a sudden clampdown on expatriates living in Morocco, and Paul and his wife Jane (who was recovering from a major stroke suffered the previous year) found it safest to escape to Lisbon, whilst Ahmed Yacoubi, Bowles’s close friend, was arrested and briefly imprisoned. This letter well represents Bowles’s anger and frustration at this difficult time. 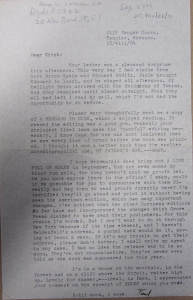 The second letter shown here (ref. UC:P110/C6/11) is dated 15 August 1964, and relates to Bowles’ collaboration with Driss ben Hamed Charhadi on the book A Life Full of Holes. This was one of several books which resulted from Moroccans dictating stories to Bowles, which he then typed up and translated. At this moment, Bowles is anxiously awaiting proofs.

We hope this might have whetted your appetite to learn more about Bowles’ life and work. Join us again next month to discover Alport’s friendships with the poet Stephen Spender and the Oxford don Nevill Coghill. 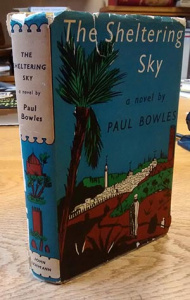 Alport’s rare second impression of the first edition of Bowles’ The Sheltering Sky.

Books available in the Alport Collection:

Books available on the open shelves in the Old Library:

Other resources that may be of interest: