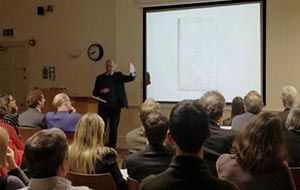 Lecture: What does Widening Participation Mean? An Historical Perspective by Peter Mandler

If you would like to listen to the podcast of the lecture it’s available to all on our iTunesU channel at: https://podcasts.ox.ac.uk/7th-annual-access-lecture-2016

Peter Mandler is Professor of Modern Cultural History at Cambridge and a fellow of Gonville and Caius College, as well as the President of the Royal Historical Society. His lecture discussed what ‘widening participation’ has meant to successive generations, beginning in the 1950s.

In the 1950s, there was a belief that university was only appropriate for around 5 percent of the population. A university education was not necessary for most professions and ideas of merit and talent were rigid, with a ‘scientific’ definition of intelligence based on intelligence tests. By the late 1950s there was a greater demand for access to grammar schools and better education, and by 1961 the impact on higher education had to be considered. Two developments known as ‘the bulge’ and ‘the trend’ had a significant impact. The bulge was a result of baby boomers reaching secondary school age, and the trend was a more democratic greater demand for places in grammar schools and higher education. The Robbins Report embraced this trend and predicted an increase from 3 percent attendance to 16 percent in 2025.

The new attitude was that education could shape society, and investment in human capital would lead to economic growth. However, wider participation did not mean more equal participation. One of the major issues that has held back effective progress over the last 50 years is ‘effectively maintained inequality.’ As university attendance rose, the number of students from disadvantaged backgrounds increased, but so did the numbers from more advantaged backgrounds. The gap between students from manual and non-manual backgrounds grew, and the already privileged groups benefited the most from the expansion of higher education. Robbins did not suggest specific steps to reach out to lower participation groups, but thought expansion itself would naturally benefit disadvantaged groups; it is clear this did not happen.

University attendance stagnated in the 1970s, before an increase again around 1986. Both unskilled wages and graduate unemployment rose, making higher education a less attractive option, and the school system was reorganised. Cuts to higher education were also influential, but by the time they occurred the stagnation trend had already begun. It is interesting just how many factors outside the universities themselves affect attendance, including attitudes towards higher education as more about self-expression and less about mobility. There is a tendency today to see widening participation as the schools’ job, but it is clear it must be looked at with a wider lens. The role of schools and universities, as well as many social factors, are all important in developing a more equal higher education system.

Professor Mandler made it clear at the beginning of the lecture that the historian’s view can be gloomy. Even today there is a focus on the widened participation for more disadvantaged groups and a readiness to ignore the widening at the top that results in a gap between the two. Despite this, the changed attitudes towards widening participation are encouraging, even if the efforts made are not always effective against effectively maintained inequality. One of the most surprising things as a current student is how recently universities have had to take equal participation seriously, and how passive they used to be about this issue. The numerous initiatives aimed at groups with traditionally low university attendance are encouraging, as it is evident wider participation by itself does not result in a more equal system.