A swift return to Univ 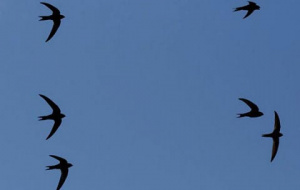 Univ is taking part in an Oxford-wide initiative to protect swifts with the installation of several custom-built nesting boxes around the College. The move follows Oxford’s designation by the RSPB as England’s first “Swift City”.

The boxes have been installed around Univ’s main site – two on the side of the Goodhart Lecture Room and another three on the side of the Buttery. They are designed to give swifts a place where they feel safe to nest (they prefer to shelter in secluded spaces) and were built by Chris Eaton, from the College’s Works Department. Chris is a keen bird-watcher and hopes the boxes will provide the birds with the protection and privacy they need and that they may also draw more wildlife to the site.

Swifts have been linked with Oxford for many years and are thought to have inspired the mythical martlet which appears on Univ’s crest in addition to the crests of Worcester College and St Peter’s College. They are known for making exceptionally long flights (covering up to 560 miles per day), living mostly “on the wing”, and so becoming associated with the idea of an endless quest for knowledge.

Swift numbers have declined by 47 percent since 1994 and the species are currently rated “amber” by the RSPB, indicating that they are significantly, but not yet critically, endangered. This decline has partly been caused by insecticides damaging their food supply and partly by the destruction of nesting space through building work – swifts particularly like to make their nests in sheltered spaces in structural cavities.

The RSPB is encouraging Oxford residents to participate in a “citizen science” initiative by observing the birds when they return to the UK from their winter migration.  It is hoped that by gaining better data on the birds, better measures can be taken to protect them. Sightings can be registered via the Thames Valley Environmental Records Centre website.

Further details on the RSPB “Swift City” initiative can be found here.