A lighter shade of blue 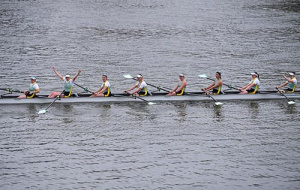 Catriona Bourne Swinton Hunter (2011, Music) raced as a coxswain on the Cambridge rowing team in the 2019 Boat Races. Catriona is currently studying for a PGCE in Secondary Music at the University of Cambridge, having previously done a MPhil .

She coxed Blondie, the women’s reserve crew, which won the women’s reserve race, beating Oxford’s Osiris. Oxford were faster off the start but as the crews came past Thames Rowing Club, Cambridge made a move and went from half a length down to almost a length up. Through the Mile Post and Harrods, Blondie maintained their lead of a length and once through Hammersmith Bridge started to pull ahead. The final margin was five lengths in a time of 19:19 to give Blondie their fourth consecutive win.

Catriona spoke about how she came to cox Blondie:

“I previously learned to row at Univ, coxing M1 to 4th place on the river in 2013 Summer VIIIs and being selected as the OUBC spare cox in 2014. After a few years of teaching music and coaching rowing in London and Sydney, I then returned to study at Cambridge. I was the spare cox for CUWBC in 2018, as well as winning the 2018 Lightweight Men’s Reserve Boat Race with CULRC and Div 1 blades with Magdalene M1 in 2018 May Bumps. This year it has been a big challenge to trial while doing a PGCE (in addition to preparing a flute concerto performance with Cambridge University Symphony Orchestra!). However, I have had an enjoyable season, winning the Championship 4+ category at Fours Head with CUWBC and then racing at numerous events with Blondie, culminating in the 2019 Boat Races.”

Stephanie Ifayemi was the subject of…