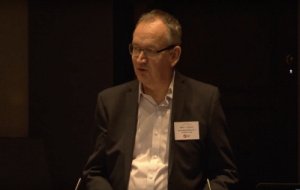 The Beale Lecture and Medal are named after Martin Beale, who was one of the pioneers of mathematical programming. Professor Jackson’s  lecture, “The Future of O.R. is Present”, drew inspiration from Beale’s work Mathematical Programming in Practice and Russ Ackoff’s The Future of O.R. is Past. Professor Jackson received the 2017 Beale Medal for “an outstanding and sustained contribution to OR”.

Professor Jackson is Emeritus Professor at the University of Hull and a Fellow of the OR Society. He has received two honorary doctorates as well as obtaining his PhD from the University of Hull. He received an OBE in the Queen’s New Year’s Honours list 2011 for services to higher education and business. His fifth book, Critical Systems Thinking: Responsible Leadership for a Complex World, was published this year.