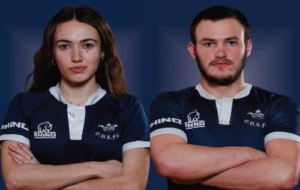 Univ is pleased to announce that Clodagh Holmes (2018, Medicine) and Sam Reynolds (2021, History) have been selected for the Oxford 2022 Rugby Varsity Squad.

The annual varsity match is celebrating its 150th anniversary, as well as the eighth year of the Women’s team being represented at Twickenham. The College would like to congratulate both of these players on their selection to represent Oxford University at this historic match.

Back in 2019, Clodagh Holmes (2018, Medicine) was named “Player of the Match” in her first ever Blues match, after scoring two tries. Clodagh started playing rugby with Univ WRFC in her first term, taking to the game quickly. In Trinity term 2019, she started going to University training sessions and was picked to go on their preseason tour to Gibraltar in September of that year. Since starting at Univ last year, Sam has been playing for the University for several months, facing teams from Staffordshire University and Richmond among others.

The match will take place on Saturday 2 April at Twickenham stadium.

If you would like to support Clodagh and Sam you can now buy tickets for the Varsity Match start from £15 and are available online.