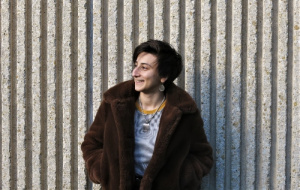 Mirela is a cultural historian of the Byzantine world. Her research explores what tools communities used to define themselves in the past, and how these definitions resonate in the contemporary history of Eastern Europe. She is particularly interested in moments of transmission and displacement, whether across languages or political cultures, and how such moments can reveal the tensions inherent in communities and their perceptions of themselves.

She is a co-convenor of the TORCH Research Network “New Critical Approaches to the Byzantine World”. In 2019, Mirela co-edited Transmitting and Circulating the Late Antique and Byzantine Worlds with Dr Hugh Jeffery (Brill, 2019). Mirela is active on Twitter.

Professor Joe Moshenska, Beaverbrook and Bouverie Tutorial Fellow in English, was chosen as a New Generation Thinker in 2015. As part of the programme, he recorded an essay for the BBC’s Free Thinking Festival. The essay discussed the 1667 recipe book by Sir Kenelm Digby, which featured recipes from sugared mallow-leaves that cured gonorrhoea to “pan cotto” cooked by Roman Cardinals. He was also a guest on a BBC Radio 3 programme discussing the history of bedrooms and how they have shifted from spaces of rest to spaces of work.

The names of the 2021 New Generation Thinkers were announced as part of a special episode of Free Thinking on BBC Radio 3 on 17 March, which is now available to listen to on demand on BBC Sounds.

The College is delighted to…

Buildings and their benefactors

Every building project at Univ…