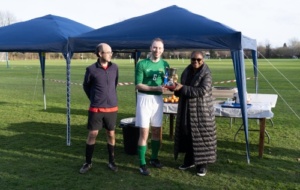 On 12 March, after two years of postponements and cancellations, the Univ Old Members Football Tournament was back! And once again, the weather played ball, the Arctic winds and horizontal sleet showers of the early years just a hazy memory of a distant past.

Robbie’s preparation was “pitch” perfect as ever… those pitches looking more like bowling greens than ever, the caterers in place, the marquee, the cups, the changing rooms, the balls… everything in place, just as we remembered it.

A few teams couldn’t make it this year, unfortunately. There was no women’s team participating, neither Old Member nor JCR/WCR. And Nigel Holmes (2000, PPE), having taken up a diplomatic post in Cameroon during the pandemic, had found it impossible to rally enough players to field his Blues team, his remaining players finding spots on other teams in the days and hours leading up to the tournament. Let’s hope those teams return next year.

The MCR arrived in good shape, but the JCR, led by an injured non-playing Myles Alexander-Bryan (2020, PPE), looked very short of numbers at the outset, and although lent a player or two from the opposition, lost 4-1 to James Raftery (2015, PPE)’s “New Grads” team in the opening match on the “Near Pitch”. Meanwhile on the “Far Pitch”, the MCR went down 3-1 in their first game to the New Reds, led by Alex Watson (2006, PPE). The Greens, who had endured drama of their own in the build-up to the big day, losing their captain, Sean Ogilvie (2011, Physics) to Covid, had a strong run of early games under new skipper Tim Firth (2011, Physics) to take the lead in the youth group table. The New Reds and New Grads challenged strongly, and a strong resurgence by the JCR saw them almost, but not quite, qualify for the later stages. In the end, it was the trio of Old Member teams that qualified for the knockout: the Greens to the semis, the New Reds and the New Grads to the Play-Off, whilst the college teams were out. 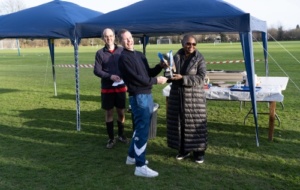 The older contingent, the “Vets”, the 90s Reds (Matt Clothier, 1990, Engineering; Aman Mahal, 1999, Economics), Blacks (John Davis, 1988, Engineering) and Oranges (Bob Gamble, 1976, Maths) had arrived with their usual talk of injuries, swan songs and possible retirements. All forgotten of course as the first game kicked off between the Oranges and the Blacks on the Far Pitch. The average age was lowered considerably by the presence of some very useful-looking young players on either side, but the Blacks were just a little stronger and were worthy winners. As they were again against a (ringer-less) 90s Reds side, who looked at this stage every bit as though they hadn’t kicked a ball in the past three years. Their second game’s showing, losing easily to the Oranges, did nothing to alter this opinion, and it was only the Byzantine tournament arrangements that saw them progress to the Play Off round, to play… The Oranges again. Notwithstanding yet more dazzling play from the youth element of the Oranges, somehow the 90s Reds contrived to win, and progress to the semi-finals.

The New Reds by this time had seen off the New Grads in the youth playoff to reach the semis. The Blacks were triumphant in the first with a last-minute winner against the New Reds, the Greens winning the second against the 90s Reds after a nail-biting penalty shoot-out.

And so to the finals. In the Gerry Fitzsimons Cup Final, John Davis’s potential fairy-tale ending was scuppered by the Greens, while The Bill Sykes Challenge Cup Final saw two completely exhausted Reds teams battle it out, with the New Reds victorious.

Football over, at last, it was time at last to relax, to catch up with old friends, to eat the food, watch the rugby and simply enjoy being back again at one of the highlights of our year.  Thanks again to Robbie, Tess, Julie, the captains and everyone else who helped make the day the success it was again. We look forward to seeing everyone there again next time!

This month for our treasure…

The Life of the Chalet des Anglais