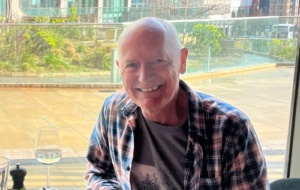 Mark has twenty years’ experience as a community-based social worker in the UK. He held a joint appointment as a practitioner and university lecturer in Sheffield when he developed his expertise in practice education. Mark has an international reputation in groupwork, social work practice methods and practice education. He has worked in the US as a social worker and, later, as a researcher and was Vice President of the International Association for Social Work with Groups (IASWG). He helped to develop social work education in Russia in the 1990s, and has headed several international projects, especially in Eastern Europe with Georgia and Ukraine. Mark has edited two journals and published 21 books, the latest being Social Work in 42 Objects and Rights and Wrongs in Social Work.

Why did you choose to study PPE at Univ?
I’d developed a strong interest in politics and I liked the fact that PPE enabled you to study a broad range of subjects within the one degree. As for Univ, some of my teachers knew it and said they thought it would be a good “fit” with me, and they were right. When I came for interview I knew very quickly that I really wanted a place here.

How do you think you changed from the first moment you stepped through Univ’s doors to your graduation?
It’s a period of immense change, the years growing from a teen to a man, and I felt greatly privileged to be spending them at Univ. The late ’60s and early ’70s were times of huge social change and this was true of Oxford, too. It was a period of hope in the possibility of progress, especially to combat inequalities. Univ taught me to martial my arguments, to listen to others, and to be prepared to change my mind. I left Univ with greater personal confidence and with feelings of considerable optimism about the future, as well as lifelong friendships.

What led you to social work? How has your career evolved over the decades?
I’ve heard an MP describe their constituency work as social work and, as someone who would have found the public nature of politics difficult, social work has been a natural fit. I’ve always had a politicised view of social work, strongly committed to social and economic justice, and I took readily to the radical social work of the 1970s, something akin to community development. I liked the fact that it sat side by side with one-to-one work, too.

I’ve never really seen myself as having “a career”, so I rather drifted into academic life – I had a joint appointment as a social worker and a social work lecturer for ten years and that was a seminal experience for me. Somehow I became a social work professor. I’m fortunate that writing comes naturally (all those undergraduate essays were good practice) and I’ve published 21 academic books, a number of them in foreign translation, including both Russian and Ukrainian. Recently I took a new direction with my writing and published a novel – In Soviet Times People Knew Where To Cross The Road. It’s based on a wild, weird and rather wonderful fortnight in Armenia after the collapse of the Soviet Union. It’s not on the bestseller list, but my old school did a review and described it as ‘the most unusual book I have ever read’. I’ll take that! 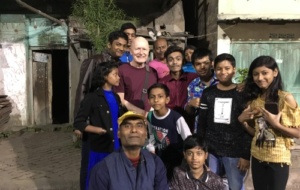 Kolkata groupwork friends and children in 2020

How has the pandemic changed your work?
The pandemic has had surprisingly little impact on my work, other than to limit my travel. For instance, I’m involved with street groupworkers in the estates of north Kolkata and I haven’t been able to stay and work with them since 2020. I was invited to spend a month at a university in Chile, but again that is postponed. However, my writing has continued and I’ve just completed the second edition of a book on social work for Routledge’s Basics series.

Most of all I’ve missed in-person conferences. Everyone puts on a brave face with video conferencing, and it is a minor miracle in its own way, but I easily tire of faces on a screen.

I do know that the impact of the pandemic has been enormous on social workers in the frontline, not least on the people they work with.

What aspects of your current work do you find most fulfilling?
I’m Emeritus Professor which means I draw a pension not a paycheque – I can say “no” to things I don’t want to do, and that puts me in the privileged position of choosing work that I know will be fulfilling. One of my main projects currently is in partnership with Coram children’s charity, developing a training programme for social workers and children’s carers that uses objects to help children tell their stories. It’s based on the success of an experimental website that has gathered more than 160 objects from people around the world to tell stories of social work (socialworkin40objects.com): this has proved very successful and there’s now a Spanish-language sister site hosted in Latin America.

I have more time to follow up on other interests, now that I am post-full-time employment. So, for the past few years, I’ve been co-chair of a community festival, now in its eighth year. Even during the pandemic, we managed to hold a pop-up festival and in a normal year we’ve built up to about 60 events over nine days. You can imagine it takes some planning, which we start in January for the September Festival. I meet all sorts of folk, like local film-makers, that I wouldn’t otherwise – it’s very rewarding and it really brings the local community together.

I’m more active in local politics – grassroots stuff, knocking on doors, canvassing opinion and voting intentions, and having political discussions with strangers: as a talk-to-a-stranger person, I really enjoy it and, by and large, it confirms my faith in people whatever their persuasion. 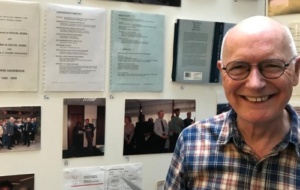 Have you faced any challenges in your life that you are happy to share here? If so, how did you cope with them?
My first job as a qualified social worker back in 1974 was in the US in what, quite frankly, was a pretty crazy organisation, though it took me a while to realise it. I was 24 and up to that point I’d only experienced permissive parents and a liberal education, so I was not prepared for the autocratic, power-games culture I experienced in that agency. For instance, people were sacked on the spot and their names removed from case files – very 1984! At first I confess I just crumbled, but then – strengthened by colleagues – I resigned before the agency managed to sack me. It was a hideous experience, but I think it made me stronger. We, a small group of colleagues who had resigned from the agency, still meet up annually and call ourselves The Philadelphians. I realise that this story is very small beer compared to the challenges that many people experience in life.

I’ve found that people go into social work for all kinds of reasons, but they tend to fall into two camps: either they’ve experienced adversity in life and this drives them to want to work with people in similar circumstances, or they’ve led very fortunate lives and they want to redistribute some of that good fortune. I fall into that second category.

Given your work in Eastern Europe and in Russia, can you provide a reflection following the Russian invasion of Ukraine?
The horror that we all feel at the current invasion of Ukraine is heightened by my personal experience of working with and in both Ukraine and Russia, and the contact I still have with colleagues in both countries. I know Georgia even better and visited a month after the Russian invasion of the South Ossetia region of Georgia, which Russia continues to occupy. My Georgian friends told me of the horrors of keeping a packed bag by the door, ready to flee at a moment’s notice if they had to.

When we introduced a Ukrainian colleague into the training team in a social work project in Ekaterinburg (a Russian city in the Urals) I was surprised by the hostility of some of the Russian participants – a small minority, I should say – who “couldn’t understand what a Ukrainian had to teach them.” One participant had the grace to write in the final evaluation that, though she had not expected to, she had actually learned much from the Ukrainian teacher and commented on her warmth and good humour. I was aware, too, during these contacts of the tremendous blow to national pride that the fall of the USSR and super-power status had on many Russian people.

Conversely, I have heard some Ukrainian colleagues previously describe Russians as their “big brothers”, so I cannot imagine what kind of betrayal they must now feel –though I know this is Putin’s war rather than the Russian people’s and understand the fear that Russians feel at the prospect of showing their opposition openly. Would we be prepared to risk 15 years imprisonment for the sake of expressing our outrage? It’s not an easy question. One Russian colleague I’ve known since 1993 wrote of the “pain, anger and shame” he feels.

As I write, one of my Ukrainian colleagues has fled Kyiv for western Ukraine and an uncertain future. I hope people will donate (money not stuff) to international aid agencies and continue to show solidarity with Ukraine – and with those Russians brave enough to oppose Putin’s madness.

Do you have any words of wisdom to share with current students?
When you’re sat working at your computer set your alarm for every 30 minutes, get up and run around, preferably up and downstairs if you can. It’ll save your back in later years.

And, of course, don’t listen to words of wisdom from those who have gone before.