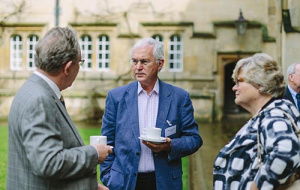 We welcomed members of the William of Durham Club to the College on Saturday 7 May 2016 for a special recognition day. The programme for the day included Shakespeare’s Twelfth Night: settings of the songs from Twelfth Night with a highly illuminating and entertaining commentary by Professor Tiffany Stern, Beaverbrook and Bouverie Tutorial Fellow in English, organised jointly with Giles Underwood, Univ Director of Music in the Hall, Univ in the Age of Shakespeare: the College, its Members, and their Books a fascinating lecture by Dr Robin Darwall-Smith, College Archivist in the Chapel, drinks in the Fellows’ Garden followed by luncheon in Hall, a stirring recital by the Oxford Commas a capella group (featuring members of Univ) in the Chapel and a rousing preview performance of this year’s Garden Play The Government Inspector by Nikolai Gogol by the Univ Players, also in the Chapel. 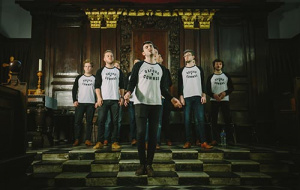 Time to fess up. I’m not actually a member of the William of Durham Club. In fact, I have always found the idea of a club for Old Members who have made provision for the College in their wills a bit off-putting, partly because it’s a rather unwelcome reminder of mortality that gets slightly scarier with each year that passes, and partly because I really don’t have the sort of money that will subsidise much more than an undergraduate’s breakfast or a brick or two for a new building. So when I got an invitation to the Club’s annual event I was a bit alarmed – I had obviously given the wrong sort of impression if the College thought I was rolling in that sort of money. There was no need to worry, as Josie Turner explained: the College wanted to widen the appeal of the Club by inviting non-members to its annual do, and there was no need to feel under any financial obligation in return. So I went. And I’m very glad I did. 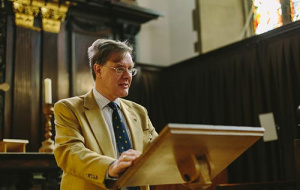 This ain’t no lunch party: it’s a full-day event, with songs, theatre, drinks, two lectures and, yes, a lunch thrown in as well. First there was the pleasure of meeting Old Members of a different vintage from one’s own, whether to hear about how the College used to be or to learn about how it is now (en suite bathrooms? And what, pray, is wrong with padding across the quad in your dressing gown?) Then we gathered in Hall for a very special event to mark this year’s Shakespeare anniversary. No, the Bard was not a Univ man, as Dr Robin Darwall-Smith confirmed in his pre-lunch lecture, though one seventeenth-century Univ man was a great admirer of his work, at a time when it was not academically respectable to be so concerned with the theatre, and he probably had a first folio in his possession in college. If he had only left that in his will… However, times and tastes have changed and Dr Tiffany Stern started the day’s revels with a delightful illustrated lecture with music, exploring the songs of Twelfth Night. Surprisingly for a play about love, though appropriately enough for the day, I suppose, they all have a death theme: Come Away, Death; the second verse of O Mistress Mine; and it’s clearly implied in Feste’s closing song (and did you know that “Feste” means “Feast”? You see – you come to Oxford and you learn something). For us they were all sung by the magnificent Soprano Maud Millar and by Dr Giles Underwood, the College’s Director of Music, with Adrianna Stoiber on piano, in a dazzling variety of versions by some very different composers, from the seventeenth century to Gerald Finzi and even to Elvis Costello (okay, that last one was a recording). 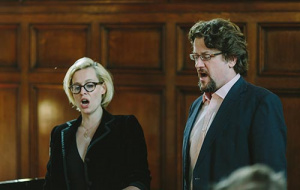 After lunch the Master answered questions submitted in advance, covering anything from how the EU Referendum might affect Oxford to how Fellows are appointed (or, if you prefer, how on earth Fellows are appointed) and then we were forced by rain to repair to the chapel for two events originally planned for the Master’s Garden. The Oxford Commas are an undergraduate male a capello singing group, who number three Univ students among their number and are clearly heading for great things. Their repertoire ranged from hip hop to traditional Irish and their energy simply fizzed. The Univ Players gave a sample of their summer production, Gogol’s very funny comedy The Government Inspector, where a village goes into panic overdrive because they mistake a visiting civil servant for an undercover inspector. It’s a great satire on administration and bureaucracy and this production is clearly shaping up to be a great success.

There was only one hiccup in the entire day, when the Shakespeare recital was interrupted by the fire alarm. It turned out it had been set off by a toaster. So even that was probably Alfred the Great muscling in on the act.