Why is Britain so badly governed? 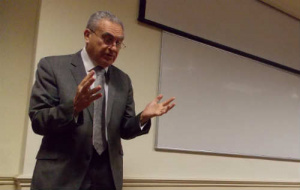 On 29 October, Sir Ivor Crewe delivered the first New Durham Club lecture of the 2013/14 academic year, following the publication of his recent book, The Blunders of our Governments.

In a busy 90 High Street Lecture Room of students, staff, Fellows and Old Members, Sir Ivor Crewe delivered a fascinating summary of his recent publication, co-authored by Anthony King, Professor of Government at the University of Essex.

After defining what was meant by a “blunder” (“A case of a government initiative to achieve one or more stated objectives which not only fails totally to achieve those objectives, but in addition, wastes very large amounts of public money, and/or causes widespread human distress, and was eventually abandoned or reversed, and was foreseeable.”), the Master discussed in more detail three blunders of the twelve that feature in his book, before analysing some of their likely causes. The lecture prompted a lively question and answer session, which included insights from those present with previous governmental experience.

Calum Miller (1996, PPE), current Chief Operating Officer of the Blavatnik School of Government, offered his views on the event and topic. Calum’s career has previously been in the UK Civil Service, which most recently included being Principal Private Secretary to Nick Clegg, the Deputy Prime Minister. Calum commented:

“The Master’s catalogue of blunders would be unbelievable, were it not so carefully chronicled. He portrayed them with dry wit and a compelling frustration that we should find ourselves repeating such foreseeable mistakes. The interesting question is what to do about them. The Master advocated a slower, more deliberative, more open approach to policy-making. But the nub of his diagnosis was that accountability is too weak. So ministers who clamour to announce enticing policies – and the civil servants who fail to point out the flaws in half-baked plans – are rarely held to account when these fail. Cracking this dilemma in the context of major projects where the time between excitable press release and attempted delivery on the ground is longer than one parliamentary term is the major challenge.”

An audio recording of the lecture is available as a podcast.