Visitor in the Creative Arts update 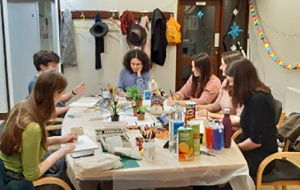 Since arriving in October, Melissa Pierce Murray, Univ’s visitor in the Creative Arts, has sought to challenge preconceptions of what art is, and demonstrate ways in which artistic activity can be used. She has engaged with students, staff and academics through workshops, drop-in sessions, formal and informal conversations.

During Michaelmas term Melissa installed dramatic orange spikes on the Quads, small interactive sculptures in the libraries or on tables during formal halls, and worked with students and staff to make miniature wire figures which took up residence in corners about the College. She got students, academics and staff skipping and dancing the interdisciplinary Hopscotch Tango as they followed chalk-drawn footsteps along the walkway in Radcliffe Quad. 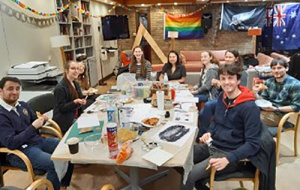 During Hilary term, she continued to support student interests and well-being: providing skills-based sessions such as casting and stencilling; leading weekly life drawing and drop-in Art Society sessions; and developing creative responses to the theme of Women at Univ, for an end of term exhibition.

In guided workshops Melissa helped students create sculptural Thinking Objects relating to their subject areas. Outcomes from the workshops with English Students were were exhibited during the English Subject dinner, where they were displayed alongside written statements about the research topics. Students and academics were inspired and enthused by the work: “It’s wonderful to use a different way of thinking, so refreshing, I came away with so many ideas!”

Next term, Melissa will continue to host these workshops within other subject areas. Ultimately, some of the objects may be cast into bronze to leave as a permanent record of the interdisciplinary critical thinking the College supports. 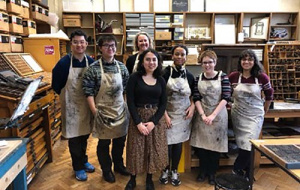 During Arts Week, Melissa worked with students in the College Bar to make large scale wall paintings, inspired by pop artist and social activist Keith Haring. Melissa papered the arches in the bar and during the evening worked alongside students including a physicist and a classicist, who incorporated their interests. One mural included physics equations and lecture notes, and the other included imagery of the gorgon Medusa from the Temple of Artemis. The response to the wall painting has been very enthusiastic. Other Arts Week activities included stencil workshops in the JCR. Elizabeth Adams, the Librarian, also ran a letterpress printing workshop with Melissa inspired by the “Women at Univ” Anniversary at the Bodleian Library’s Bibliographic Press.

Responding to student interest, Melissa helped students establish ArtSoc, weekly drop in open art sessions. Hosted in the MCR, ArtSoc is open to all students (MCR and JCR) and is tutoring weekly life drawing sessions in the Butler Room. The aim with both life drawing and ArtSoc is to help set up and establish these so that they can continue in the future as student led activities. 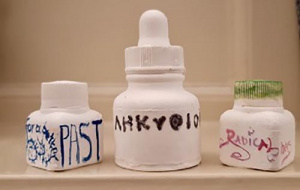 Melissa also ran the activities for the SCR and staff, via apothecary cast plaster bottles. The challenge to academics from Univ was two-fold: first to paint something on the cast plaster bottle that related both to the object itself and to the academic’s area of research. The second challenge was to try to guess the meanings or ‘contents’ of the other painted bottles. Rather than a collection of medicines compiled according to crafted recipes and accurate measurements, these bottles represent a repository of different kinds of knowledge and experience. In the Works department, these objects took on a more practical function, promising up to a 50% increase in time, extra space and no more tight squeezes, and some all purpose magic. The artist is not responsible for any consequences.

Insights from US Trade Surveillance

Miles Kellerman holder of an…