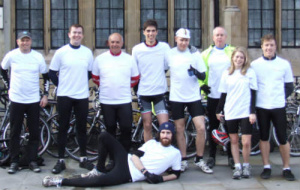 Congratulations to Team Univ, who are on track to raise £3,000 in sponsorship from their Westminster to Islip Big Bike Ride for Oxford Children’s Hospital (Radcliffe Hospitals Charitable Funds).

On Sunday 14 April, our team of intrepid cyclists set off at 9am from Westminster Abbey on a 65 mile journey to Islip. The ride was started by Canon Jane Hedges of Westminster Abbey. Team Univ extended the 65 mile challenge by a further 7 miles by cycling back to the College afterwards. Two of our cyclists, Oliver and Jack, finished third overall (from over 300 cyclists in the race) and Elle and Dan completed a slightly shorter 40 mile ride on a Tandem – well done guys!