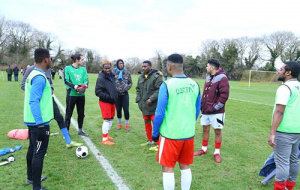 In February, Devas Club members made their annual visit from south London to the hallowed portals of University College. The Univ-Devas link is 144 years old, since the Devas family, led by the parents of a University College student tragically killed near Zermatt in a climbing accident, set up the club in Battersea to support disadvantaged youngsters in memory of their dead son. The 30-strong party which included men and women’s football teams were welcomed at the gates by Club Trustees and began their visit with a hearty brunch in the famous hall. Here Paul Flather, who has involved with the Club for 30 years now, and has long worked at Oxford, introduced students to Oxford and Oxford life and answered questions about studies and life in the university.
The Devas party, including a few youngsters who were keen to explore access to study at Oxford, accompanied by Mark Clay and senior coaching staff, were then given a tour of the College library, chapel and memorial to the famous poet Percy Shelley, by two college students – Imogen Thrussell, who is now in her fourth year studying an Masters in Physics and Rebecca Williams who is in her first year studying Experimental Psychology. 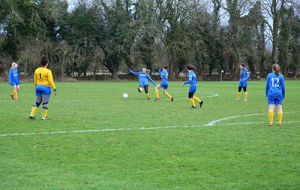 This is the second year that a women’s match has been arranged between Devas and Univ, with the Univ women still easing in to the role. They were given a free coaching session by Dave Crilley, our women’s coach, high in the FA pecking order, which was much appreciated. Once the match kicked off, the Devas team soon showed themselves on top, and with goals coming regularly eased into a 9-0 lead by half time, ably led by the team captain, Manhoor Rauf who is the female rep for the south London region with the FA. Even so the goalkeeper and captain of their team – Georgia Allen who is studying History and Politics and has played football since she was young, woman of the match as it turned out – led by example, defending her goal well. The second half was more relaxed and the official result was recorded as 9-3 with some judicious refereeing and some friendly play and Georgia playing half the match as centre forward.

In recent years, the men’s match now celebrating some 20 years in the current run, has often been keenly fought, and the match was no exception with Devas just about on top in the first half by 1-0. A recent match had ended memorably at 4-4 with an equalizing goal from the Univ in the final kick of the match. After half time the Devas team displaying greater exuberance and skill gradually came out on top, with the final score 4-1 in their favour. The Devas captain Tevon Webster, showed his paces, and was adjudged man of the match. It was satisfactory result as the team had managed to leave its kit at the youth club. One team member only made just before half time, having gone back to retrieve the official kit. The enhanced of being in team with a single kit may well have helped Devas in the second half, as Misha Jones the Univ captain who is studying Russian and Czech languages agreed light-heartedly afterwards. 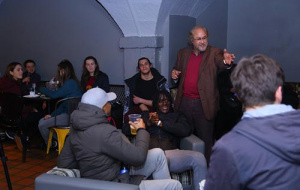 As usual, team members, coaches, trustees and supporters, gathered in the Univ College bar for a final farewell and a drink before the Devas party headed back to south London after another enjoyable and successful visit. There was plenty of hot food on tap, pizza and burgers and plenty of takers. Paul Flather rounded off the day with some congratulations to the two players of the teams – the two captains, the staff from the Devas side, and above all to the University College side, the food and bar staff, the ref, and of course the head of the College. Sir Ivor Crewe echoed his own thanks and promised tougher matches in the years to come as the women’s team continued to develop and the men’s worked harder on tactics. The Devas then made their way onto their coach parked on the High Street in Oxford outside the college and headed home – with all their kit safely on board. Until the next visit.

It’s a busy time at the Gatehouse and we…