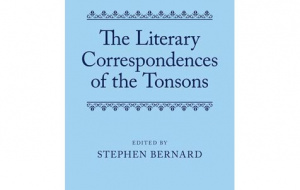 A new book by Stephen Bernard, British Academy Post-Doctoral Research Fellow and JRF in English at Univ, The Literary Correspondences of the Tonsons, has been published by Oxford University Press.

The Tonsons were the pre-eminent literary publishers of the late seventeenth and early eighteenth centuries. They carried Shakespeare into the eighteenth century and started the practice of modern editing of him. They were also Dryden’s main publisher and the first to publish Pope. Jacob Tonson the elder was the founder of the famous Whig Kit-Cat Club. Read more…