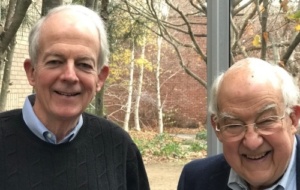 Dan Coquillette (1966, Law) is the Charles Warren Visiting Professor of American Legal History 2021-2022 at Harvard Law School. Previously, he served as Dean of Boston College Law School from 1985-1993 and was named J. Donald Monan, S.J. University Professor at Boston College in 1996. His brother, Bill Coquillette (1971, Law) attended Univ too, as a Marshall Scholar, and later served as the President of the Association of Marshall Scholars. He is also a former Partner at Jones Day.

For the Coquillettes, Univ was quite the family affair. The brothers attended as students and their father, Robert, supported the original Stavertonia Project. We invited them to share their memories of life at Univ and to give their reasons for supporting the Univ North development. Dan responded with the following:

“When I arrived at Oxford in Michaelmas Term, 1966, I had a graduate scholarship, but no Oxford contacts whatsoever and no place to live. I will never forget the welcoming friendship of the Weir Graduate Common Room, then a shabby single room off the Front Common Room. The room was not much, but its friendly occupants, graduate students like me from all over the world, made great difference.

“But where to live? Through the Fulbright people, I found a room in, of all places, Staverton Road! Every day I biked down to College for tutorials with the likes of Lenny Hoffman, Dyson Heydon, and John Finnis. They were great teachers! I also made good friends with my fellow lawyers, and stay in touch with some of them today. But the room on Staverton Road was just a place to sleep. There was nothing there.

“When I learned of the Staverton Project, I saw at once the value of a residential center for graduate studies! My brother Bill, who went to Univ as a Marshall Scholar, also quickly saw the value of the idea.  So did our father, Robert Coquillette, who made one of the first substantial donations to Stavertonia, and whose name appears on the original plaque.

“It is hardly surprising that Dad would be an early convert. He was able to go to Harvard College only because he won a Conant Scholarship, founded to assist men from state schools in the Middle West All his housing and support came from the College. He saw at once why Stavertonia was a great idea. Bill and I have been sure to add his name to the second plaque, thus recognizing his early vision and generosity.

“Bill and I frequently think of the College. We are both so grateful to Univ.”

Find out more about our previous and upcoming Univ North tours.

Read more about the College’s vision for a second community on the Univ North microsite.