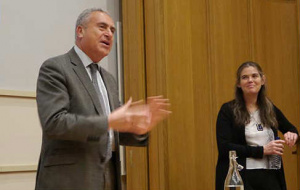 The 2014 Univ Access Lecture took place on Tuesday 17 June. Professor Daphne Koller, co-founder of Coursera and Professor of Computer Science at Stanford University, discussed “The Online Revolution: Education for Everyone”.

“The title of the lecture concerned an online ‘revolution’ and Professor Daphne Koller certainly expressed this in explaining and justifying Massive Online Open Courses (‘Moocs’), and specifically the company she founded, Coursera.

Professor Koller is an academic in computer science at Stanford University where she is the Rajeev Motwani Professor in the School of Engineering. Together with a colleague, Professor Koller founded Coursera as a way to deliver world-class education to the globe – even those with few resources, and certainly not the means to afford university fees, could access experts talking about their subjects. Coursera is essentially made up of a network of top universities from across the world (now we are told that the majority are non-US universities) all collaborating in the effort to extend education everywhere.

She began by showing us what was on offer, right from ‘Machine Learning’ to ‘Global History since 1760’ and by how students are assessed. Using smart use of mass data, Coursera allows for precise feedback despite the lack of one-to-one interaction with an academic. Professor Koller also showed us the personal destinies that have been transformed by this innovation, given that many, after completing a course, had the skills to further their careers. Many also simply enjoyed the ability to really learn.

It was quite interesting to deliver such a lecture in a university whose primary teaching method is, as the Master said, profoundly different to that offered by Moocs. Yet, the underlying feeling was that this was all quite complementary to the work that goes on at Oxford – many academics had created Coursera courses because they were passionate about what they do and wanted to share this with the world. Indeed, the kind of mass data analysis could potentially move tutors to transform their university-based courses; something they would never be able to do on such a micro-level.

I left the lecture feeling that this was something that top universities would have to start considering and getting involved in if they were not already. Population rises in the developing world and increasing levels of affluence mean that the demand for higher level education is going to be enormous within the next 20 years, and platforms such as Coursera are part of the answer to this.

It seems as if this is a development within global higher education for which we should all look out.”