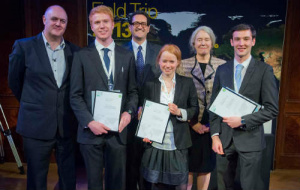 We entered the BP Ultimate Fieldtrip Challenge last term after hearing about it from a talk in the Chemistry Research Laboratory and thinking that the prize (a 2 week internship with BP to visit some of their offshore oil rigs and facilities in the Shetland Islands and Norway) sounded amazing. After completing an online quiz we were given our initial brief: to come up with an innovation to significantly improve the cost of passenger travel per kilometre travelled in one particular country.

We came up with the idea of developing bioethanol from the cellulose in rice husks in China, and sent this initial proposal in to BP. Several weeks later we found out we had made it into the semi-final (along with 11 other teams) where we had to design a technical poster, pitch this to the judges, then give a 10 minute presentation of our idea and be grilled on the topic by a judging panel. The competition was stiff with many great ideas from the other teams, so it was definitely a surprise to find ourselves as one of only four teams invited to the final. At this stage we were partnered with two people from BP (one was on their graduate scheme, and the other was fairly high up in sugar to biodiesel technology – ideal for help and advice with our idea!) We had several telephone meetings and had to go to their offices in Pangbourne for a meeting with them both.

In preparation for the final we also had to make a 4 minute film presenting our idea. We had no experience of film making and 5 days in which to do this, so it was pretty challenging, but we were allowed to go to the film editing studios where we worked with the professional film-makers to bring together all of the clips we’d taken into a reasonable film. This was a great experience – none of us had ever done anything like it – and a steep learning curve!

The final itself took place on Friday of 8th week at the Royal Institute in London. The judges this time were different people so we again had to pitch our poster to them. Then our film was shown and we were questioned on it by the judges in front of a packed lecture theatre at the Royal Institution – a terrifying experience

We unfortunately didn’t win, but the whole day was really exciting (presented by Dara Ó Briain). We met a lot of people who were genuinely interested in our idea, and keen to chat to us about it and the ways in which it could be successful. As runners up prizes we were given membership of the Royal Institution.

All in all it has been a great experience and we definitely didn’t expect to get this far when we entered last term. We’ve got the chance to apply a science based solution to an actual problem in the world, and have come to appreciate that there are lots of issues surrounding implementing an idea such as ours. Between the film-making, poster-making and public speaking I think we’ve also learned lots of skills that we wouldn’t have got in day-to-day Chemistry.”