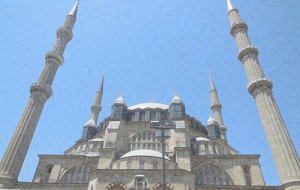 I would like to offer Victoria Short and all those associated with the Roger Short memorial fund a massive thank you. This scholarship fund made the trip possible, as I was entirely dependent on it, and it allowed me to make my itinerary as flexible and diverse as I could have wished. I also wish to express my thanks to the Master for his support, and the College for lots of important travel advice, as this was the first time I was travelling alone in a foreign country.

The history of Turkey reads like the history of mankind – from the Hittites to the Greeks, Romans, Byzantines, Selcuks and Ottomans – and being able to visit the place which at least three major world civilizations thought important enough to battle for was amazing. One of my finals papers this year is intimately connected with the history of Turkey, as is my thesis, and as a historian (and one especially interested in art and visual material), the advantage gained from actually seeing structures and surviving materials first-hand and being able to travel to experience the far-off cultures I have been studying about is almost impossible to overstate.

I look forward to one day returning to this tremendous country.

Day One: in transit – Oxford to Instanbul

On a whim and not looking forward to the long wait at Heathrow till my flight boarded, I bought Dan Brown’s Inferno at the airport. I’m not usually one for ‘thrillers’, but an easy read was precisely what I was looking for after the long eight weeks of term. It was an enjoyable read, partially because it turned out to be full of art, Renaissance, Venice and Florence references (which anyone who has ever met me will know I talk nine to the dozen about) but mostly because coincidentally the climax of the novel happens to take place here, in Istanbul! Having not known this when I picked up the book, I decided that this must be no less than a sign from the heavens and was feeling quite smug about the trip ahead.

The fun read also made up for the fact that Turkish Airlines had somehow bungled up my meal and had no vegetarian food to serve me: “So a turkey sandwich isn’t okay? Would some chicken be alright?” I had to very gently let down both my air hostess and my stomach by telling them that it unfortunately really wouldn’t. I did, however, have the ‘Turkish cheese pastry’, which was really good, and seemed indicative of the kind of thing I will probably be eating the next two weeks. This is not an issue: I like bread. I also had a fun conversation with the lovely gentleman seated next to me on the plane who was also travelling to Turkey as a tourist (the DSLR gave it away), and we exchanged itineraries and shared mutual excitement.

By the time we landed, it was clear I had somehow managed to hitch rainclouds onto the airplane and brought a torrential downpour with me from England. I’d had an hour of sleep in the last 36 hours so I crashed as soon as I got to the hotel, although despite the unpleasant weather I couldn’t resist and went on a short walk (umbrella in hand)and spotted the Hagia Sophia minarets! I am definitely in the old bit of the city. The roads are tiny and cobbled, with absolutely minuscule shops and cafés. The impression I got on my way here from the airport is that Istanbul is very European in terms of architecture, planning and city style but the crowds are much more Asian in terms of dress/attitudes (not grumpy at all about constantly being cut in line…!)

I also had my first rip off! Because I’m staying in Istanbul for so long the hotel generously offered me a free dinner upon arrival – when leaving, I bought an extra bottle of water and needed to pay the waiter 3 liras for it. Not having any change, I gave him a 20 lira note which he returned with a ten lira note and 7 lira coins. I was excited at seeing the coins because I’ve never seen Turkish coins and picked a few up as he hovered about; he then just picked up the note and said something to the effect of “alright, you’re done then?” and I felt terribly awkward and couldn’t well say “actually, no not really, I was going to pick up that ten lira note…” It was just an awkward situation but probably one I could have taken control of.

I am really excited about going out into the city tomorrow! I plan to start big, with the Hagia Sophia, Topkapi Palace and so on. 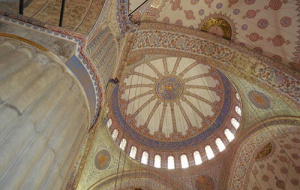 A clichéd confession: The highlight of my day today was definitely the Blue Mosque, despite thinking for a shamefully long period of time that it was Hagia Sophia. They’re not great in terms of signs here, quality and quantity (see my getting lost later) and the two monuments are literally opposite each other and look somewhat similar to the first-time visitor if you don’t already know what is what. The Blue Mosque is, in my opinion, infinitely nicer looking from the outside, which is why I made the assumption. A fun fact about its inside is that the chandeliers once had ostrich eggs on them to ‘avoid cobwebs by repelling spiders’ – which the Mosque’s official website now describes as having been “pillaged” for display in Istanbul’s museums. What I also found very interesting was how very similar it looks architecturally to the Taj Mahal in India: they were built around the same time, but in very different kingdoms and contexts for usage (as the Taj is a tomb). The idea of ‘Islamic architecture’ and just how widely it was diffused I found really striking.

On the subject of museums with ostrich eggs, I spent about 20-25 minutes walking round on what seemed like unceasingly upward sloped roads looking for the Turkish and Islamic Art Museum but after going round in many a circle and asking many people (they’re either overly keen (India! Shah Rukh Khan! Namaste!) or not very keen at all to give directions…) I discovered to my disappointment that it’s closed for the year. Luckily, I plan to salvage this by checking out the Pera Museum at some point, which is private but apparently has some incredible Oriental paintings and a special exhibition right now on East-meets-West, ambassadors, diplomats and that kind of thing.

Another fun thing that I came across was the Yerebatan Cistern, which used to be an open air basilica complete with gardens and things until it a) was pushed underground over the years and b) was turned into an absolutely massive cistern held up by a forest of columns. The entrance and exit span several roads over ground. I don’t really think in numbers but I think the figure was something like it can hold 800,000 cubic metres of water.

Apart from this, the Hagia Sophia, the Big Palace (bad translation?) Mosaic Museum and the Archaeology, Ancient Orient and Islamic Ceramics Museums were also admired, all courtesy of my 72-hour Müze Pass.

It is amazing just how widely and well connected Istanbul was. The obelisk in the picture was meant for Karnak in Egypt, a Venetian doge is buried in Hagia Sophia, the similarities between the Taj and the Blue Mosque I mentioned earlier, I saw a sarcophagus covered with etchings of Alexander the Great, and heard of sultans who had been to Budapest!

Onwards and upwards tomorrow with the Grand Bazaar and Topkapi Palace.

You can read the whole of Samvartika’s Travel Report on PDF here.