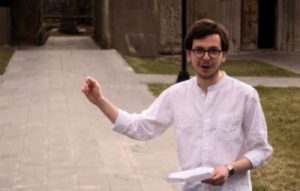 I have always been interested in Turkey, both in its Aegean and Caucasian contexts. As a PhD student working on late Byzantine history (particularly thirteenth-century political history), I need no persuading that Turkey is a fantastic place to visit. Yet before I was offered the support of the Roger Short travel scholarship, I had only ever visited Istanbul and Antalya and their respective environs. The support of the scholarship allowed me to visit a number of locations in eastern Turkey, Georgia, and Armenia, which I would never have been able to see without such generous support. I have been able to expand my horizons both academically and (probably more importantly) personally, through my travels.

During the Easter vacation 2016, I went to eastern Turkey and Georgia with a friend (and fellow Byzantinist), before travelling to Yerevan (Armenia) where I joined a group of twenty-six faculty and students from Oxford for a research trip in Armenia, which I organised and led personally as the president of the Oxford University Byzantine Society. The planning of the trip took a great deal of work for half a year before we departed. Organising the trip with the help of the professor for Armenian studies at Oxford. It involved academic presentations by the researchers on the trip at all of the sites we visited. With the stress of organising this element of the research trip, I am particularly grateful for the scholarship, which allowed me the freedom to travel before the trip, for my own work and enjoyment.

My diary will consist of some of my notes on the highlights of the trip. Things that really stuck out for me each day that I was away. I also attach a copy of the booklet which I compiled from/for participants of the second part of the trip in Armenia and which goes into a great deal of detail regarding specific sites.

Day 1 (3 April)
We flew from London to Trabzon. To do this we had to change in Istanbul in the evening. Consequently, my first sight of Turkey was the sun setting on a glistening Bosphoros as our plane circled around the Hellespont, as if to give us the best possible view.

Our arrival as the only two ‘international’ transfers on our second flight to Trabzon, saw us separated from the other passengers and taken to an entirely separate terminal, where the lights were turned on to herald our arrival (and locate our bags).

Day 2 (4 April)
Having linked up with a friend and colleague, Ilhami, who kindly hosted us at Trabzon University while we were in the city, we headed straight for our first monastery. Sumela, is set in the foothills of the Pontic alps, a stunning drive into the mountains up the valley floor from the city. Although deprived of seeing any of the documentary collection of the monastery, since the whole site has been closed for months for much needed restoration works, it would be hard to complain about the trip, which took us into incredibly beautiful country.

Taken though we were with the asceticism of Sumela, we rushed back to Trabzon in time for Ilhami to assist the humanities faculty football team in their grudge match against the maths department. Our overenthusiastic support was probably instrumental in a resounding victory for maths. No less contested than the football was the church of Hagia Sophia in Trabzon, which we visited immediately afterwards. The thirteenth-century Byzantine church, which had for decades been a secular state museum, has recently been claimed as a mosque. The building now symbolises the conflict over the Byzantine past, which has literally no less than figuratively constructed barriers that obscure vision. It’s pretty hard to see the frescos.

Day 3 (5 April)
Trabzon is a lively city, so relaxing in the shade beside the central square after looking round the Genoese and Venetian elements of the medieval city (of which there is almost nothing left) was not a trial.

The bus journey to Hopa, which is situated just before the border with Georgia, took us along the coast, where a modern road has blasted a path through perilously steep mountains, where each patch of cultivatable land is stepped into mini fields. In Hopa we stayed in a charmingly decorated hotel, which also functioned as a brothel. The breakfast was excellent, offering a stunning sea view.

Day 4 (6 April)
After crossing the border into Georgia, we visited Gonio, a fortress which was almost certainly the furthest outpost of the so-called Empire of Trebizond of the late Byzantine period. This perfectly square Roman fort, sits uncomfortably before a wide beach strewn with old Soviet fortifications.

Batumi, the second city of Georgia and self-proclaimed Las Vegas of the Black sea, has been transformed by the rapid growth of Russian holidaymakers, and now boasts a California-like paved seafront promenading space, a fantastic statue of the city’s most-famous ‘ex-resident’ Medea, and a skyscraper with a mini ferris wheel embedded in its top floors. The museum is crammed full of interesting documents and illuminated books which have not yet been centralised in Tbilisi.

Day 5 (7 April)
I was incredibly struck by Kutaisi, the next place we visited, after a hair-raising marshrutka ride. This sleepy town and erstwhile capital of the early Georgian state, cannot help but put the visitor at ease. The fantastic, if somewhat problematically restored, cathedral watches over the city which is clustered around a beautiful twisting river. The old government buildings are particularly beautiful, giving the city an air of understated if dusty grandeur.

Day 6 (8 April)
The journey from Tbilisi to Yerevan, although a seven-hour marathon, revealed a section of the topography of the Caucasus. From the plains of Tbilisi, through the narrow defiles and rusting ex-industrial towns of northern Armenia, past the foot of mouth Aragats (the largest mountain in the modern republic of Armenia), to the rolling conurbation of Yerevan.

Day 7 (9 April)
In Armenia the pace quickened and my duties as organiser became slightly overbearing, as I think did I, in an attempt to push through a crammed itinerary of pretty much every site in Armenia relevant to a wide range of Byzantinists and Armenologists. Other than the sites situated in the contested territories of Nagorno-Karabakh, we saw almost everything, excepting the mountain citadel of Amberd, which was still cut off from the world by the winter snows.

This first, day however, was based solely in Yerevan where we sat at the feet of Mother Armenia, to survey the city, before visiting the sobering genocide museum and the contrast of the recently-restored Persian mosque.

Day 8 (10 April)
On our second day in Armenia, we travelled to see a number of sites in and around Etchmiadzin the Catholicosate of Armenia. Here we were fortunate enough to be welcomed not only around the cathedral and its collections, but also the adjacent seminary, where we were blessed with a performance by the seminary choir.

Day 9 (11 April)
The Princeton-based archaeologist of Dvin graciously showed us around the citadel that he had spent much of his career excavating, giving an insightful purchase on a complex archaeological space. Despite the number of archaeologists in our group this mostly mud-brick site, around which the late antique history of Armenia, Byzantium and Persia pivoted, would have been difficult to even start to understand.

The sun decided to show us around the thirteenth-century monastery of Norovank, which bathed in sunlight cannot fail to take the breath of even those who are not convinced that thirteenth-century monastic complexes are one of the better things in life. The Mongol-faced ancient of days above the door made a particular impression on me, although much excitement was expended attempting to get the best possible group photo on the steps of the largest church.

Day 10 (12 April)
Up to this point we had been traveling by coach, but to reach Tatev, our next stop we had to switch to more mobile vans and then cable car. This monastery must be seen to be believed.

At the head of the Vardenyats pass, renamed from the Selim pass after the formation of the republic, sits a beautiful thirteenth-century Caravanserai. Not even the breakdown of the coach could detract from this fantastic shelter for weary travellers.

Having been delayed by the breakdown we came late at night to Notaras the vast cemetery of khachkars (Armenian grave stele of a cross, lit. cross-stone). Exploring the cemetery by the light of torches by night is something I will not forget.

Day 11 (13 April)
Again we were welcomed by our colleagues from the Armenian church at the seminary on the shore of lake Sevan. The choir blew us away in the foyer of the seminary’s teaching rooms and we enjoyed fish by the water, before climbing the hill to the monastery that sits above the lake. Before leaving we segued off to look at the old concrete Communist party writers retreat.

Day 12 (14 April)
We spent the day crisscrossing the valley in northern Armenia, which we drove down to get to Yerevan. Instead of the bleak rusting ruins of the copper mines, which we saw in the bottom of the valley, we visited the plateaus on either side, where, I was surprised to discover, many monasteries and churches were set in plush fields and meadows.

Day 13 (15 April)
There are a lot of monasteries in Armenia. We saw almost all of those that date to the thirteenth-century (there are some benefits for those organising the itinerary). By this point the various features which make up their architectural language of medieval Armenian architecture were becoming familiar. So as we reached remote stunningly beautiful monasteries and became more and more casual about their beauty and context, I was getting much better at reading them. The uniquely Armenian gavits (which roughly function as a narthex) in particular were fascinating to see and walk through.

Day 14 (16 April)
From Gyumri, a town at the centre of a devastating earthquake, we rushed off to Marmashen, leaving one of the professors in the hotel whilst he was attending to the call for nature. He was received by taxi at the churches to rapturous applause, not least because we diverted the taxi to collect an old man from the village who had the key to the church.

Day 15 (17 April)
At Bjni we were treated to what was basically an encomium of Grigor Magistros, the writer who lived in the town and is studied by several members of the group, where a beautifully set citadel looks down over a tall church, now set in a sleepy village. The total opposite was waiting for us at Geghard where a vast monastic complex, an easy drive from Yerevan was packed with the inhabitants of the city.

Day 16 (18 April)
Our final day outside Yerevan ended like the rest of the trip. Four churches and three monastic complexes later, we limped home to sleep, quietly relieved, if disappointed, that the snow had stopped us from going on the three-hour roundtrip to Amberd fortress.

Day 17 (19 April)
After toiling in the countryside on some really long days, starting and finishing in the dark, we spent our last day in Yerevan. Where, after visiting some incredible and unexpectedly fascinating pre-historic sites, we were hosted in the Matenaderan by our Armenian colleagues. We were shown around the manuscript collection, the restoration department, and the public displays by the fantastic team in the national manuscript library hosted us fantastically. A fitting end to a fantastic trip.

Thanks again to the Roger Short scholarship programme for my award and the experiences I was given by the trust.