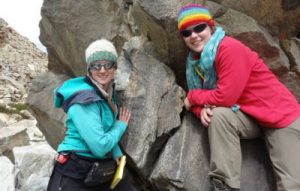 The movement of plates across the earth’s surface is a process known as plate tectonics. Some of these plates make up continents and others the oceans. When they meet, the ocean plates, which are more dense, get forced beneath the continent in a process known as subduction. This subducting ocean then acts as an anchor, dragging the attached continent beneath the other continent as well. An example of this is the Tethys ocean, which was subducted beneath the Asian continent. About 50 million years ago, this ocean became completed subducted and the attached Indian continent got dragged down beneath Asia. This was the beginnings of the building of the Himalayas.

This summer I spent a month working in the Indian Himalayas, looking at rocks that have been subducted to depths of 100km beneath the surface of the earth. The purpose of my research was to collect samples and field evidence that tell us more about the history of these rocks, the processes that occur on a microscale and how this affects the macroscale.

My first visit to India was full of surprises; this included logistical surprises as well as cultural ones. I had been told to expect plans to be organised last minute but to fall into place nonetheless, and that is exactly what happened. After overnighting in Delhi airport and acclimatising for a few days in Leh, the capital of Ladakh, at 3500m, I was ready to depart and there was no sign of Delhi belly – a good start! The drive to Tso Morari was amazing! We followed the Indus river, which marks the collision zone between the continents of Asia and India. As you drive east, you can see mountains of granite to your left and layered, folded sediments caught up in the collision on your right. The route we took went via Mahe bridge which is the closest to the Chinese border that foreigners can go, although accompanied by the geological survey of India we managed to go on a day trip to the Nidar valley, even further east. The road takes you through a complete section of ocean crust that has been trapped between the two continents as they collided. 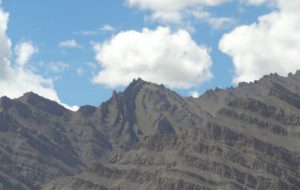 Sediments caught up in the suture zone

The plateau itself is at 4500m and is a dry desert. The valleys are filled with huge flood deposits which form terraces over 7m high. Beyond the terraces are scree slopes leading up to a cliff face. These cliff faces are great for looking at the relationship of the different rock types and deformation, however they are much more difficult to sample. Beyond the cliffs, the plateau is a desert, with outcrop on the tops of the ridges leading up to the 6000m peaks. 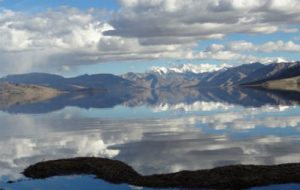 There are two large Tibetan lakes on this plateau; Tso Morari and Tso Kar. Both of these lakes are wetland reserves managed by the WWF. They are home to 34 species of bird, including 6 vulnerable species which were identified in a survey in 1996. One of these species is the rare black necked crane, of which there are 3 breeding pairs living at Tso Kar. We were lucky enough to catch a glimpse of all 6 of them! There were also golden eagle and Lammergeiers nesting on the cliffs, marmots in the valleys and blue sheep running across the valleys and up the cliff faces. 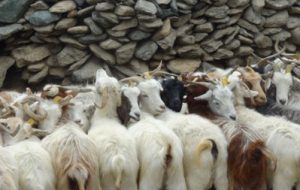 There are few villages in this region and most are home to a nomadic people, who move around every month or so with their pashmina goats and yaks. As their name suggests, these are the goats that provide the wool for pashmina, however it is only the beard of the goat that provides the purest wool and true pashmina. A nearby village is actually a Tibetan village, full of Tibetan refugees who fled across the border when the Chinese invaded Tibet. In the village is a Tibetan Children’s Village (TCV), a residential school developed to help to preserve the Tibetan culture. 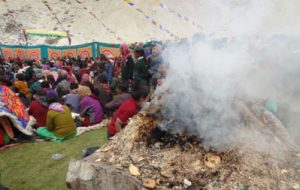 Whilst we were camped in this valley, the Lama from Hemis monastery arrived, along with 200 nuns on bicycles. They had cycled from Kathmandu over 2 months on a pilgrimage and stopped in this valley for a 3 day Buddhist festival. There was incense burning, Ladakhi dancing and traditional dress as well as Tibetan traditional dress. All the nomads and villages around had gathered together for this celebration. It was at this festival we met the teachers from the Nomadic Residential Children’s School and were invited for dancing and to meet the children. The teachers were very interested in what I was doing and with the aid of some maps, hand drawn cross sections and a selection of rocks, we managed to set up a display, explaining the geology of the region.

After a successful fieldtrip working on UHP rocks caught up in the India-Asia collision, meeting the local people and observing some amazing wildlife in a beautiful area, I can’t wait to go back next year!

Fieldwork in the Indian Himalaya