Fieldwork in the Indian Himalaya 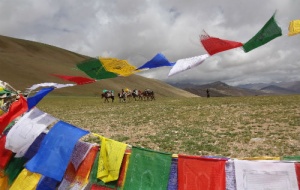 This summer, I embarked on my second field season in the Indian Himalaya, in order to study the rocks of the Indian continent that have been caught up in the building of the mountain range known as the Himalaya. The rocks of northern India, pushed up right next to the Asian continent, preserve evidence that they were once taken to deep depths (100km) into the mantle and subsequently returned to the surface. These rocks once formed the edge of the continent of India. 50 Million years ago, the ocean that once existed between India and Asia closed, and the subducted ocean plate, which was still attached to India, is thought to have dragged down the edge of the Indian continent into the mantle. However, continents are very buoyant and are hard to subduct (like trying to pull an inflated balloon under water), and so it managed to detach and return back to the surface as we see today. This process is known as continental subduction and is a poorly understood process. Historically, it wasn’t thought physically possible until the discovery of minerals such as coesite (a high pressure form of quartz) or microdiamond. These discoveries convinced people that this whole section of continent must have experience the high pressures of a subduction zone, despite what the physicists say. 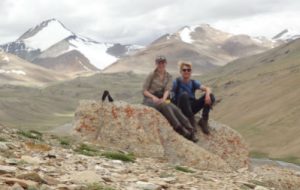 To begin my 6 week field season, I had to fly up to Leh, the capitol of Ladakh in Jammu and Kashmir. Leh is a city at 3,500m altitude, making it necessary to spend a couple of days acclimatizing. This is ideal in India, as the logistics of the trip, despite numerous emails, still needed to be organised; food needed to be bought, permits obtained, cars arranged and eventually pack horses found. My field area is called Tso Morari, about 250km south east of Leh, 8 hours by car. The lake itself lies at the eastern end of my field area. For the first week, I revisited a few places from my first field season where more samples needed to be collected. The next job was to get away from the roads to the more remote areas of this small mountain range. 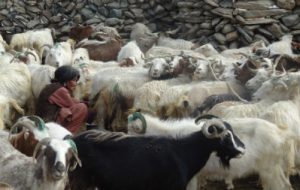 During this first week camping, a Tibetan nomad and 6 horses happened to walk through our campsite and, lo and behold, the logistics for the next 3 weeks were organised! This area is a nomadic area where Ladakhi and Tibetan people live with their livestock. In summer, they move their camps to high up in the mountains, along a route which has become a popular trekking route with tourists. Whilst camping above 5000m, myself and my field assistant were attempting to map and sample rocks which outcrop on the top of the ridges. These ridges consist of about 500m of very steep scree, which, at altitude, is no easy feat. The days were cut short by the regular thunderstorms in the afternoons, followed by torrential rain from 4pm everyday. This was the tail end of the monsoon which occurs further south, a particularly wet year.

Carrying rocks and walking long distances at altitude can be difficult, but the views are extremely rewarding and after 5 weeks in the field, a well deserved rest in Leh was welcome. The next challenge: getting 206kg of rocks back to the UK!

Big data – Where to start!