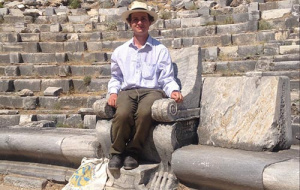 This is an account of my trip funded by the Roger Short Scholarship. It was splendid fun, and I learnt an enormous amount. I have long wanted to visit Turkey in order to see the antiquities there, which are among the most important in the Classical world, and I was enabled by the bursary to achieve this purpose splendidly. I am therefore enormously grateful to the trustees and to the college.

I travelled out on Thursday 16 August, by plane from Birmingham to Rhodes. Starting from the following morning, what follows is the travel diary I kept during the trip. It is more or less exactly as I wrote it in fountain pen at the time, with only slight corrections. (The entries get progressively shorter, partly because my father was with me for most of the second part of the trip!) 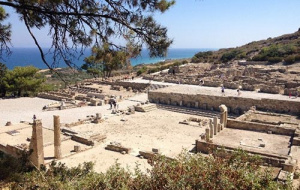 On Friday 17 August, I took the 9am bus to Cameiros. This was one of the three original Greek cities of Rhodes, and (I think) the sight I most enjoyed in Rhodes. The ruins are large, extending from the acropolis through a large area of housing down to the agora (pictured) at the base of the site, and are all the more interesting for being Hellenistic in date, having all been rebuilt after the earthquake of 226 BC. It also has interesting facilities for water collection and distribution. The site took less than an hour to explore, and, since the return bus was not until 1215, I had the pleasure of sitting and dozing on a bench overlooking the site for a good while. 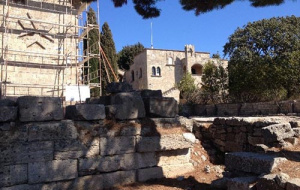 The bus back to Rhodes City passes through Ialysos, a substantial modern town not far from Rhodes City. Like Cameiros, it was one of the three original Greek cities of Rhodes. I therefore got off at Ialysos, and set about walking to the Acropolis (a.k.a. Mount Phileremos). This is a rather long and steep walk, and one on which Google Maps led me up the wrong path; this was certainly rewarded, however, by the Acropolis itself. It has no extensive ancient ruins (only the base of the Temple of Athena), but a fine monastery (pictured) with some excellent architecture from the time when the Knights Hospitaller ruled Rhodes (14th to 15th centuries). Walking to the opposite end of the Acropolis from the monastery, though (along a path adorned with fourteen Stations of the Cross), one comes to a large viewing platform with a huge concrete cross upon it. From here, the views are astounding even by the standards of ancient Acropoleis; practically the whole of ancient Ialysos’ territory is visible from here, which is to say at least a third of the island, as far as Mount Attaviros, the tallest mountain in Rhodes. As I was making my way down the hill, a kind couple of Romanian tourists offered me a lift in their car. The man driving asked me about what religion I belonged to, coming as I did from England, and seemed most puzzled when I said I was an agnostic and didn’t have one. 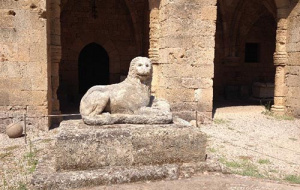 I took the bus back to Rhodes, and visited Rhodes Archaeological Museum in the evening. This is a lovely place (pictured), which has the great merit of being housed in the former Hospital of the Knights Hospitaller, built in the 15th century, which contains a delightful internal garden with exhibits through it. In general there are few things nicer than an archaeological museum in a mediaeval building of independent interest; the same can be said of the Etruscan Museum at Rome (in a Papal villa) and the Bargello at Florence (in the mediaeval prison and barracks). Of exhibits, a red-figure birth of Aphrodite stuck in my mind most. Some collections, including the epigraphic collection, turn out not to be open in the evenings. 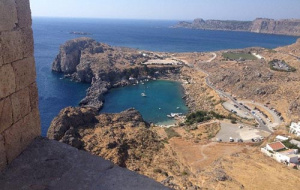 On Saturday 18 August, I got up very early, and took the 6.15 bus to Lindos, the third of Rhodes’ ancient cities, and the most visited and spectacular. The Acropolis is impressive (although perhaps over-restored), with lovely views again (pictured). I had breakfast and then went up to the Acropolis, and (as I often like to) sat for a while behind the Temple of Athena reading a novel. By the time I came down (about 10.30), the way down and the picturesque modern village were thronging with tourists—whom I was certainly right to avoid by coming early. I visited the prominent Church of the Panayia, whose frescoes (by the 18th-century Gregory of Syme) were particularly splendid, depicting more strikingly the story of Adam and Eve, the Last Judgement, and other scenes, than I have had the experience of seeing Orthodox art do previously. 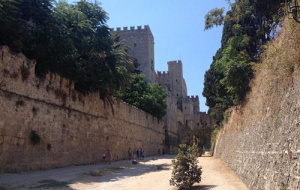 I returned to Rhodes City at lunchtime, and took a walk to the Acropolis of Rhodes —that is to say, the Hellenistic Acropolis of the city that was first established in 408 BC when the original three cities of the island were united into one polity. This site (not on a large hill this time) contains a heavily restored theatre and stadium, and the largely unrestored ruins of the temples on the Acropolis. Nearby I saw a few lesser sites (a Hellenistic House and a ‘Palatial Building’), and also three interesting subterranean temples (visible from the top, through large halls in the ground) thought to be Nymphaea. I then returned to the Old Town and had a look at the Palace of the Grand Master of the Knights Hospitaller. This grand place contained a temporary exhibition on twentieth-century Rhodian pottery that was not uninteresting; however, the permanent exhibitions with ancient artefacts were again not open in the evenings. I took a wander around the Old Town, including a pleasant stroll in the old Moat: the fortifications built by the Knights Hospitaller (pictured) are most impressive, and the town is a most pleasant place (and large enough not to seem overcrowded even with the tourists, unlike the village of Lindos).

You can read the whole of Theodore’s Travel Report on PDF here.