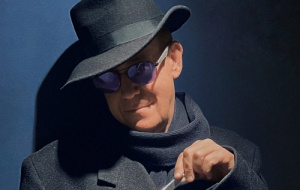 John Weltman (1979, History) is starring in Tru at the Cotuit Center for the Arts in Massachusetts from 5-22 August 2021.

John and director Carol McManus bring Truman Capote to life in this one-man tour de force. Adapted from the words and works of Truman Capote, Tru takes place in the writer’s New York City apartment during the week before Christmas 1975. An excerpt from Capote’s infamous novel Answered Prayers has recently been published in Esquire and the author’s friends, recognizing the characters as thinly veiled versions of themselves, have turned their back on the man they once considered a close confidant. Alone and hurting, Capote soothes himself with pills, alcohol, and chocolate truffles while musing about his checkered life and career.

Written by Jay Presson Allen, who was already famous for her script writing on The Prime of Miss Jean Brodie, Cabaret and The Verdict. Allen wrote Tru using 70% of the script from Capote’s own words on television and in his writing. Robert Morse, who played Tru on Broadway, won a Tony for his virtuoso performance.

John Weltman is a lawyer and founder of the largest surrogate parenting agency in America, Circle. He recently discussed “Establishing Parental Rights for LGBT+ Families in American and European Nations” at a joint JCR/WCR/SCR event to celebrate LGBTQ+ History month. Circle is now the largest surrogate parenting agency in the world with the highest number of babies born per year. John was the first to establish the right of couples to secure insurance coverage for gestational surrogacy in Massachusetts. John and his partner of 38 years were the first gay couple to have children through surrogacy in the United States. Before founding The Weltman Law Group in 2010, John was a partner at Lawson & Weitzen, and before that a partner at Shafner & Gilleran.

John has previously performed as Albin/Zaza in the Falmouth Theater Guild’s La Cage Aux Folles and in Cotuit’s black box as Alan Turing in Breaking the Code and on the main stage as Vanya in Vanya. Most recently, aside from Cotuit’s annual Broadway Backwards revue, John appeared in Director Tim Hystad‘s last show, Falmouth Theater Guild’s She loves Me, as the head waiter insisting upon a romantic atmosphere. John dedicates this performance to his dear friend, Tim.

Rachel Ojo is a…