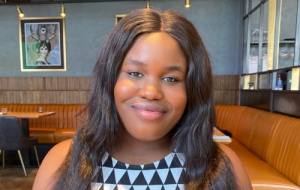 Rachel Ojo (2020, PPE) is a shortlisted nominee for the National Diversity Awards in the Positive Role Model Award for Age category.  Rachel Ojo is the chair of the UK Youth Select Committee on knife crime and a member of the UK Youth Parliament for Essex.

Rachel has conducted oral evidence sessions in the House of Commons, gathering evidence on knife crime, an issue that young people decided was most important to them in a consultation that reached over 1 million young people. Rachel represented the young people of the nation at a meeting with former Prime Minister Theresa May. In February 2020, the Committee launched a report in Parliament detailing recommendations to the government on how to effectively tackle knife crime. Rachel has helped organise many countywide projects including a mental health festival for young people and is a ONE youth ambassador, helping to end poverty.

The winners will be announced at the National Diversity Awards 2020 on Friday 17 September at Liverpool’s Anglican Cathedral.

A year after planned events…