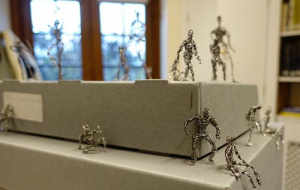 In Scandinavian folklore, Tomtes are spirits or guardians, little gnome-like figures which look after the house and farm. Seldom or never seen, the tomte asks little from the family other than its due respect and a traditional bowl of milk or porridge. When treated well they protect the family from harm, while if offended they will play tricks and cause mischief. In extreme cases they will leave the homestead, and the farm will fall into disrepair and the family no longer thrive.

As a child growing up in the mountains of Colorado, I was introduced to Tomtes through illustrated books of Swedish fairytales, as retold by Elsa Olenius, Astrid Lindren and Vickor Rydberg. These adventures- of brave or incautious children beset by brutish mountain trolls and outwitted by clever tomtes- were richly illustrated by artists such as John Bauer and Harald Wiberg. The stories imparted to me some of the culture of my grandfather’s family of Swedish stonemasons. 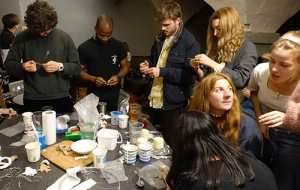 During Student Welfare Week, I helped students fashion little wire figures which they took back to their rooms. I placed others of these about the library, and each time upon returning found them in different positions and poses. I brought wire to the lodge and works department and showed the staff how to make the figures. The mini-sculptures they fashioned took on lives of their own, scaling the computers and surveying from atop, holding pencils, wrestling, reading tiny newspapers, or brandishing swords. I attended the Scouts’ weekly meeting and we made multitudes of figures, then drew scenes on paper and used the figures to illustrate scenes and stories. During Oxmas festivities, I positioned red-capped Tomtes in the Senior Common Room, Staff offices, in the Kitchen, and in the Works and Grounds Departments.

University College cultivates education and erudition. Tomtes seem an apt metaphor for academic and pastoral lineage and care in the College community. Leaving small figures about the college might appear whimsical, but also solicits acts of creation and individuality that the college is so careful to nurture. Students, staff and academics all pursue individual interests and duties, working together within the walls and grounds of this historic institution. 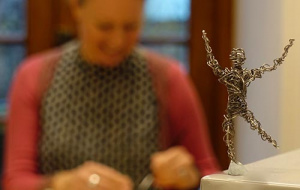 During this first term of my position, I focused on raising awareness of the role the Visitor in Creative Arts through engaging with all of college community. In drop-in sessions, themed workshops and informal interactions, I taught new skills and approaches, such as drawing, casting and wire construction. These provided opportunities for creative explorations and demonstrated ways in which I can help individuals create satisfying outcomes. I tend not to tell people exactly how to make or do things, because then they would just make what I make. Instead I show or enable them to get started, and only provide assistance when they get stuck. This allows them to develop their own ideas. In the coming term I will build upon this awareness and engagement to work with students and academics on more targeted projects.