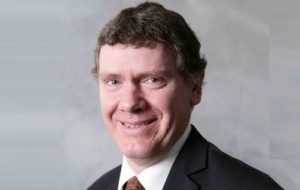 Dr Andrew McCormick (1975, Geology) retired from the Northern Ireland Civil Service in August 2021 after almost 41 years’ service, of which the last 19 were at Permanent Secretary level.

Dr McCormick’s final role before retirement was as the lead official on Brexit for the devolved Northern Ireland Executive. He was awarded a CB in the Queen’s Birthday Honours List in 2021.

As Director General for International Relations, The Executive Office, from 2018 to 2021, he was responsible for international relations, EU relations, and the North South Ministerial Council. He was the lead official for the NI Executive on all aspects of Brexit. He represented the Executive at JMC(EN) and other Ministerial Brexit meetings in the three-year period when there were no Ministers in post in Northern Ireland. In 2020 and 2021, he represented the Executive at the Ireland/Northern Ireland Specialised Committee on the Withdrawal Agreement.

After reading Geology at University College, Oxford, he did a PhD in Geochemistry at Queen’s University Belfast. His PhD research project was on the isotope geochemistry of the granites of the Eastern Mourne Mountains, Northern Ireland, which was a direct follow-up to Dr JD Bell’s second-year tutorial at Univ on the Skye Granites.

He has worked in Northern Ireland Civil Service since 1980, mainly in Department of Finance & Personnel up to 1993. Finance Director in NI Department of Education from 1993 to 1998. Director, Central Finance Group and from May 2002, Second Permanent Secretary, NI Department of Finance and Personnel. In the period of the first NI Assembly after the Good Friday Agreement (1999-2002), he was the lead official on all financial issues and budgets, including the Reinvestment and Reform Initiative agreed between the First Minister, Deputy First Minister and the Blair Government in 2002.

He was Permanent Secretary of Department of Health, Social Services and Public Safety, and Chief Executive of Health and Social Care from 2005 to 2014, leading the reorganisation of the Health and Social Care in 2007-09 as part of the Review of Public Administration. He was Permanent Secretary, Northern Ireland Department for Enterprise, Trade and Investment 2014-2016, and then Department for the Economy 2016-18. He is vice-chair of the Council of European Christian Missions Ireland.

John Finnis, Emeritus Fellow in Law, has been…