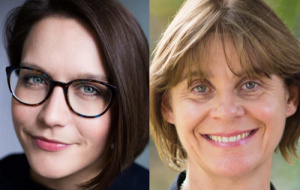 We are delighted to announce that two members of the Univ community have been named in the Queen’s Birthday Honours List. Ms Anne-Marie Canning (pictured left), Univ’s former and first Schools Liaison Officer, has been appointed MBE for services to Higher Education. Supernumerary Fellow-Elect Professor Sarah Harper (pictured right) has been appointed CBE for services to the Science of Demography.

Anne-Marie Canning is Director of Social Mobility and Student Success at King’s College London. In this role she provides leadership for whole of institution strategies and services underpinning widening participation, student transition, retention and success, student facing events, engagement and communication (including graduation). She is currently leading a project with the Cabinet Office examining whether behavioural insights can improve the experience and outcomes of non-traditional learners at university.

She is a member of the Universities UK Social Mobility Ministerial Advisory Group and recently served as Chair of the Russell Group Widening Participation Association. In 2008 she was appointed as the first full-time Access Officer at University College, Oxford and her work at Univ earned her a University of Oxford Teaching Award. She has a degree in English and Related Literatures from the University of York and served a sabbatical term as the president of the students’ union. She has served as a local councillor and is now an associate governor at the Archer Academy. You can follow her on Twitter @amcanning.

Professor Sarah Harper is Professor of Gerontology at the University of Oxford. She is the Co-Director of the Oxford Institute of Population Ageing which she founded in 1997 with funding from the NIA. Of her CBE, Professor Harper commented,

“I am honoured that the work on population ageing which I and colleagues have undertaken here at Oxford over the past 20 years has received such recognition, and it is immensely rewarding to have our research and the impact it is able to have on policy and practice thus recognised.”

Between 2014 and 2017 Professor Harper served on the Prime Minister’s Council for Science and Technology, which advises the Prime Minister on the scientific evidence for strategic policies and frameworks. In 2017 she served as the Director of the Royal Institution of Great Britain, and was appointed as a Director and Trustee of the UK Research Integrity Office. In 2018 she was appointed to the Board of Health Data Research UK.

She chaired the UK government’s Foresight Review on Ageing Populations (2014-2016) and has chaired the European Ageing Index Panel for the UNECE Population Unit since 2015. She is a Governor of the Pensions Policy Institute and a Fellow of the Royal Anthropology Institute. Her research was recognised by the 2011 Royal Society for Public Health: Arts and Health Research Award.

She has a background in anthropology and population studies and her early research focused on migration and the social implications of demographic change. Her current research on demographic change addresses the impact of falling fertility and increasing life expectancy, with a particular interest in Asia and Africa.

We look forward to welcoming Professor Harper as a Supernumerary Fellow at Univ in September.

Congratulations to everyone who was recognised in the Birthday Honours list.

Happy Christmas from all at Univ…