The Parrot in the Mirror 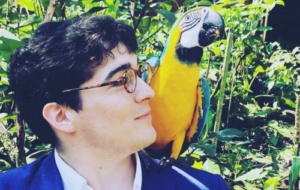 Dr Antone Martinho-Truswell (2015, DPhil Zoology), former Junior Dean, has written a book based on his DPhil research, The Parrot in the Mirror, which will be published in March.

The Parrot in the Mirror discusses the surprising similarities between human behaviour and social interaction and the lives of birds and analyses the process of convergent evolution which has led to these similarities, considering what evolutionary pressures influenced the behaviour of modern day humans and birds. Antone also demonstrates the ways in which human behaviour is both unusual and extreme in the animal kingdom and explores the ways in which we can understand ourselves better by understanding birds.

Antone commented: “This is a book that was really born in Univ. In the last months of my DPhil, inspired by conversations in the Hall with other students, on philosophy and consciousness, I wrote an article about animal consciousness and how it related to my research. That proved popular, and I found myself having frequent conversations specifically about why birds made good research subjects and were really informative and enlightening when asking scientific questions about the mind. Those conversations grew into a more refined idea of the deep similarities between humans and birds, despite their very distant relatedness.

“I realised that I could teach non-scientists a great deal about evolution, and particularly about convergent evolution and how adaptations feed off and affect each other, through an exploration of those similarities. So this is a book all about the things that make humans so different from our mammal relatives, and why we share many of those traits with birds, and underneath that, it is also a lesson in how to think like an evolutionary biologist when you look at the natural world.”

You can preorder The Parrot in the Mirror online.