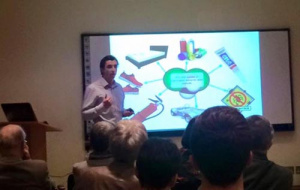 On Thursday 19 February the Univ iGEM (international Genetically Engineered Machines) team gave a presentation to a packed audience in the Swire Seminar Room, before joining the Master and Fellows as College guests at High Table.

Last year, the University of Oxford’s first ever iGEM team was awarded a prestigious Gold Medal at the 2014 Giant iGEM Jamboree in Boston, USA. The team of 12 third-year undergraduates across five subject disciplines was founded by Univ members Philipp Lorenz and Glen-Oliver Gowers. As part of the New Durham Club Lecture series, the iGEM team members and Univ undergraduates Glen-Oliver Gowers (Biochemistry), Sian McGibbon (Law) and Oliver Vince (Engineering) presented the team’s work and their views on the advances of the exciting field of synthetic biology as well as its impact on our society.

Introducing the audience to the fundamental principles of classical Molecular Biology, Glen Gowers defined Synthetic Biology as the (re)design and construction of biological devices, parts or networks with novel functions for useful purposes. This area of science, which draws principles from Engineering and (Molecular) Biology, but also from Chemistry, Informatics and Physics, is still a young discipline and aims to engage and involve the public – something that classical Bioengineering perhaps has not considered enough in the past. Synthetic Biology has, in fact, the potential to have a huge impact on our lives in many different ways with significant future applications in many areas, from preventing birth defects to the generation of biofuels, to cancer medicine. One general aim in Synthetic Biology is the design of fully programmable cells, allowing their behaviour to be predicted accurately. For instance, cancer-eating bacteria are currently being developed and tested, which would allow for a much more specific and efficient treatment of tumours. More recently, great progress has been made in the design of fully synthetic cells and macromolecules, which will not only help to increase our understanding of how life originated and works in general, but can also provide sustainable safety mechanisms surrounding the applications of genetically modified organisms in the context of a new field of Biology referred to as Xenobiology.

Genetically modifying bacteria has been the central part of last year’s Oxford iGEM project, titled DCMation, which aimed to design a novel bioremediation approach by developing a user-friendly device for the detection and degradation of the hazardous yet indispensable solvent dichloromethane (DCM). In his description of the team’s project, Oliver Vince explained how parts of the native gene cluster in Methylobacterium extorquens responsible for the sensing and degradation of DCM were inserted into Escherichia coli, a bacterium that is is not only very well characterised, but also extremely easy to work with in the lab in contrast to the native bacterium. Bioremediation was therefore optimised by expressing the DCM degrading system in host strains, while incorporation of the bacteria into novel diffusion-limiting biopolymeric beads ensured safe and rapid degradation. Biosensing on the other hand was achieved by linking the DCM-sensing parts of the native bacterium to a fluorescent response, enabling the user to identify easily whether the solution was contaminated with DCM or safe to dispose of. A more detailed description of the project, the experiments carried out and the data collected can be found on the Oxford iGEM 2014 wiki page.

As can be seen on their wiki page, a core feature of the Oxford iGEM team, and one important reason for their success last year, is the collaboration between Biochemistry, Engineering, Chemistry, Biology and the Humanities, following the ideal of an interdisciplinary approach necessary for successful research in Synthetic Biology. The engineering students in the Oxford iGEM team worked with the biochemists every step of the way to design initial project ideas, analyse the expected responses of the system, as well as predict and interpret the results of the various types of experiments.

One crucial aspect of Synthetic Biology, and a fundamental part of every iGEM project, is the involvement of the public. In the past, a section of the scientific community and industry has, to a certain degree, played down concerns of the public as irrelevant by arguing that the general public lacks a proper understanding of the scientific principles. However, a key feature of Synthetic Biology as well as the iGEM competition is to enhance public approval of research in this area by interacting with, and involving the public. The huge potential of Synthetic Biology will only have a beneficial impact on our society in the future if scientists and biotechnology companies are committed to explaining their research to the public in order to avoid misunderstandings and are willing to respond to useful criticism, suggestions and concerns. As part of their “Policy and Practices”, the Oxford iGEM team has looked at how intellectual property has become an increasingly important and controversial aspect of scientific advance. Discussing the advantages and disadvantages of legally protecting scientific research, one member of the audience asked why one shouldn’t aim for the ideal of a completely open access to everything in terms of intellectual property regulation. This would not only promote collaborative research, but could help to avoid restrictions on the scientific progress due to patents on certain biological parts, for example. In fact, open-source mentality is a core value of the iGEM competition at the moment, creating a huge collaborative spirit between iGEM teams across the world. However, completely open access can, in some cases, have the disadvantage of discouraging teams to publish or submit highly valuable biological parts as this would make it much harder for teams to commercialise the applications of their research. These aspects, protection of intellectual property and the ideal of open access, have been the fundamental part of Sian McGibbon’s legal proposals to the iGEM Foundation.

The team members finally expressed their gratitude towards the Master and the Senior Tutor of University College, who were extremely supportive and helpful throughout the entire process of the iGEM project.

Thank you to Philipp Lorenz for the review.