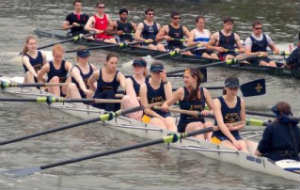 This year has been an exciting one for the boat club.

After intense land training in Hilary term and the disappointing cancellation of Torpids, we entered Trinity term with enthusiasm. With 5 women’s and 4 men’s boats in Summer Eights, Univ had the highest participation of any other college, reflecting the dedication of rowers and coxes, and the fantastic organisation by this year’s captains.

An exciting week’s racing ensued. M4 showed great dedication, despite being bumped three times. A strong row-over on Saturday saw them finish off the week on a high and avoid spoons. M3 were bumped by Green Templeton II on Wednesday but came back with a vengeance, rowing over on Thursday and bumping Trinity III and LMH II on Friday and Saturday. Starting in division III, M2 had a tough challenge this year. After rowing over on Wednesday, they were unfortunate to get bumped by Magdalen II on Thursday (following a collision with the bank) as well as on Friday by Wadham II.  Saturday saw them end the week well with another row-over. M1, started the week in 4th place in division I, rowing over on Wednesday. On Thursday and Friday, they were bumped by Magdalen and Trinity, but ended the week with a strong row-over. Overall, they put in a fantastic performance and maintained Univ in the top half of a first division comprising crews with blues rowers and Olympic medallists!

The women’s side of the boat club also had a fantastic Eights week. W5, a boat comprised entirely of coxes with very little rowing experience, put in a great performance with two row-overs, a bump from St Annes III and a triumphant bump on Keble III. W4, a graduate boat, combined both experienced and novice rowers to gain 2 row-overs, as well as being bumped twice by St Hughes III and St Peters II. W3 had a good week’s racing, despite being surrounded by strong crews in division 5. Even after being bumped on the first three days, they held off Keble II until Univ boathouse on Saturday, in an excitingly close race. W2 had an exciting Eights week this year. Bumping up to the top of division IV on Wednesday, they successfully raced as sandwich boat in division III an hour later, bumping Worcester II. Quick bumps on Christchurch II, Pembroke II and Linacre II followed, earning the crew blades on the Saturday: a fantastic reward for a dedicated term’s training. The women’s First VIII ended a successful year with strong row-overs on each day of Eights, maintaining their impressive position of 8th in Division I.

Overall, Summer Eights has ended a highly enjoyable and successful year for the boat club and we look forward to building on this solid foundation next year.