Spirit of Univ at Gaudy 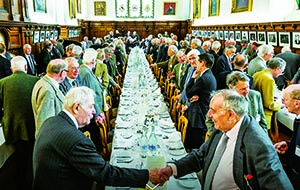 Over 150 Old Members caught up with friends and classmates at March’s Gaudy for those who had matriculated before 1960.

Old Members from classes as early as 1943 attended the event, and for some this was their first visit to College in well over fifty years.

Many noticed changes since their time at Univ, from the recently refurbished Goodhart Building and newly developed 10 Merton Street, to there being pansies in Main Quad instead of wallflowers this year.

Guests enjoyed a number of talks during the day: Elizabeth Adams, the College Librarian, gave a presentation on the archive; and Director of Development, William Roth, spoke on behalf of the Archivist, Robin Darwall-Smith. Both talks were held in the new lecture theatre in 10 Merton Street, giving Old Members a chance to see the expansion of the library in the adjoining rooms.

Two further talks took place in the Chapel: Emeritus Fellow David Bell shared his experience of a geological expedition to Greenland in 1966, including original film footage from the trip; and Marie Curie Fellow Julian Merten treated the guests to an introductory talk on cosmology.

For many, a highlight of the day was the three course lunch in Hall, during which guests took the opportunity to share happy memories of their time at Univ. Between courses, the Master expressed his delight at welcoming so many Old Members back, and David Edward raised a toast.

Though finding that much had changed materially at College, and Oxford as a whole, there was a consensus that “the spirit of Univ” flourished the same way it did over fifty years ago.

The College would like to thank all our Old Members who attended. We hope to see you all again soon.

A list of upcoming events can be found here.

Dr Sturgis, Director of the Ashmolean…