Songs of Hope in Times of Oppression 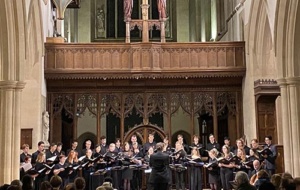 On November 10 the combined musical forces of The Chapel Choir, Martlet Voices and guest instrumentalist, Richard Tunnicliffe (cello) came together to perform a programme of music inspired by war. The setting was the wonderful space of St John the Evangelist Church on Iffley Road, Oxford. The larger scope of much of the music was well suited to the more generous acoustics of St John’s, in particular the two main pieces in the programme. The concert started with Richard Rodney Bennett’s A Farewell to Arms with all the voices accompanied by solo cello. This thrilling piece uses poems from the 15th and 16th centuries about the peace after war (“The helmet now an hive for bees becomes”).

The concert ended with Roxanna Panufnik’s All shall be well for the same forces, a piece written to celebrate the 20th anniversary of the fall of the Berlin Wall, using the words of Julian of Norwich and a medieval Polish battle hymn. In between, there was music about both World Wars and the Serbian conflict but the overriding theme was of hope in peace. Soloists from the choir sang beautifully – Maryam Wocial, Claire Gordon-Brown and Ella Sparks – and all the student singers rose to the challenges of some very demanding music.

Thanks go to the professional members of Martlet Voices – Anna Crookes, Carys Lane, Lucy Ballard, James Oxley and Robert Rice – for their ensemble singing and encouragement to the students, and to The Master for her continuing support of Music in the College.

On the last Thursday of term…

It is fair to say…

We warmly welcome you…

The loss of live music has…