No surprise that Univ has produced so many Alumni of note, but, following a chance conversation, we were surprised by quite how many had been immortalised on screen and even more surprised to find that one had been played by Australian rock star Michael Hutchence… 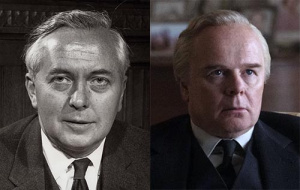 Let’s start with Harold Wilson, Fellow of Univ 1938-45. 2006 was a double bill for Wilson; he was portrayed by Kenneth Cranham in the BBC4 drama The Lavender List (written by journalist and broadcaster Francis Wheen) and by James Bolam in the dramatised documentary The Plot Against Harold Wilson. More recently Jason Watkins took up the mantle in season 3 of The Crown. 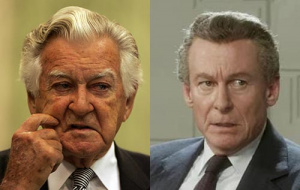 Another Univite on The Crown‘s roster was Australian Prime Minister Bob Hawke (1953, Economics), played by Richard Roxburgh. As with many historical aspects of the long-running series the portrayal of Hawke was widely criticised — not least by his widow Blanche d’Alpuget.

Staying with world leaders Bill Clinton has, depending on interpretation, been played on screen either two or three times. 1998’s Primary Colors (directed by Mike Nichols) was a highly fictionalised account of the 1992 Clinton campaign, adapted from the roman à clef novel — initially published anonymously — and switching out names to make the future President “Governor Jack Stanton”, as played by John Travolta. 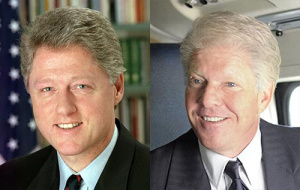 In 2008 Clinton was played by Dale Leigh in slight rom-com Definitely, Maybe. But it wasn’t until two years later that he took centre stage in The Special Relationship; written by Peter Morgan, Dennis Quaid played Bill Clinton opposite Michael Sheen’s Tony Blair, reprising the British PM role from Morgan’s previous outings The Deal (2003) and The Queen (2006). The Special Relationship’s Hilary Clinton was played by Hope Davis. 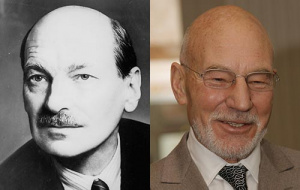 Finally for politics, let’s turn to Clement Attlee (1901, History) who has been played on screen, exclusively in films about Winston Churchill, no less than four times. Star Trek TNG’s very own Jean-Luc Picard (AKA Patrick Stewart) played Attlee in 1974’s The Gathering Storm, followed by Norman Jones in Winston Churchill: The Wilderness Years (1981), Bill Paterson in 2009’s Into the Storm and finally David Schofield in Joe Wright’s much lauded 2017 film Darkest Hour. For the sake of completeness, the corresponding Churchills were Richard Burton, Robert Hardy, Brendan Gleeson and Oscar-winning Gary Oldman. 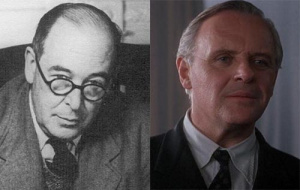 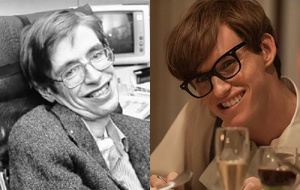 More awards aplenty for 2014’s The Theory of Everything, directed by James Marsh, which saw Eddie Redmayne’s extraordinary performance as Stephen Hawking (1959, Physics). Redmayne won the Oscar, BAFTA and Golden Globe for his efforts. Less well-rewarded and remembered — but absolutely worth seeing — is Benedict Cumberbatch’s portrayal of the great man’s younger life in the made-for-TV Hawking (2004). 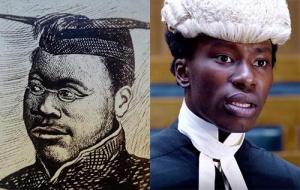 Christian Frederick Cole: The Story of England’s First Black Barrister (2020), was written, produced and directed by Pamela Roberts, the founder and director of Black Oxford Untold Stories, it explores the life of Cole, who came to Oxford as non-collegiate student in 1873 to read Classics. He was played on film by both Prince Plockey and Moses Alexander. 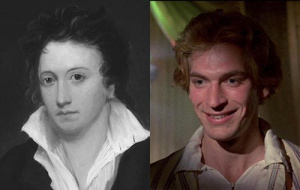 Deep breath for our penultimate OM. Poet Percy Shelley (matriculated 1810) has made at least eight appearances on screen starting with Douglas Walton’s portrayal in The Bride of Frankenstein (1935). Next came the 1965 short Le Dernier Matin de Percy Shelley with Clotilde Joano as the eponymous hero, followed by Julian Sands in Ken Russell’s phantasmagorical Gothic (1986). Valentine Pelka took the role in Rowing with the Wind (1988) opposite – and you couldn’t make this up – Hugh Grant as Lord Byron.

From high art (Shelley not Grant) we turn finally to murder and the multiple tales of Prince Felix Yusupov (1909, Forestry/English), assassin of Grigori Rasputin. 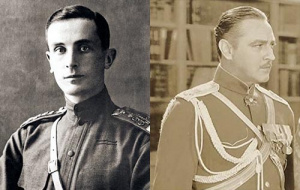 In 1932 John Barrymore played the fictionalised Yusupov as “Prince Paul Chegodieff” in Rasputin and the Empress – unfortunately for MGM their fictionalisation didn’t go far enough and Yusupov sued the studio, not for portraying him as a cold-blooded killer, but rather for the suggestion that his wife, Princess Irina (or “Princess Natasha” as the film had her), was seduced by Rasputin. The Yusupovs were awarded £25,000 in damages and the case led to the common disclaimer about characters and events being works of fiction that we still see on movies today.

Four films, all rather unimaginatively called Rasputin, were released in 1971, 1981, 1996 (Alan Rickman memorable as Rasputin) and 2010 with Yusupov played in turn by Richard Morant, Aleksandr Romantsov, James Frain and Daniele Savoca.

Perhaps not all portrayals listed above are particularly flattering, although in the case of an assassin that may not be surprising. There is also, regrettably, no example as yet of women from our extended Univ family being immortalised on film.

Have we missed anyone? Let us know…

The Gifts of Solitude