Sibelius at the Proms 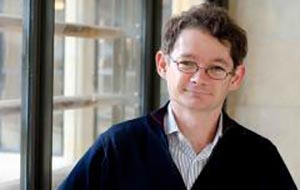 Professor of Music and Senior Lecturer at Univ, Daniel Grimley, wrote a commentary on Jean Sibelius’ Belshazzar’s Feast, Suite, Op.51 in the programme of events for the first night of the Proms on 17th July, 2015.

The piece was performed by the BBC Symphony Orchestra and was played after the interval, before the night came to a close with Walton’s Belshazzar’s Feast.

Professor Daniel Grimley recently edited and contributed to the work, Jean Sibelius and His World (Princeton, 2011), which explores the development of Sibelius’ style and how contextual factors influenced the overall compositional process. As an expert in the field, Professor Grimley was able to provide substantial notes on this particular suite, providing the audience with an accessible introduction to the piece.

Professor Grimley’s other research interests include the expression of landscape as an embodiment of performance and medium of representation. He also focusses on early twentieth century English music and Scandinavian music.