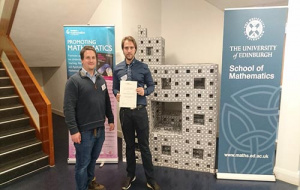 Kristian Kiradjiev (2016, DPhil Industrially Focused Mathematical Modelling) has been awarded the Early Career Mathematicians Catherine Richards Prize by the IMA for his article on “Exploring Steiner Chains with Möbius Transformations”, which was published in Mathematics Today magazine.

He has previously won another IMA prize: the ECM Catherine Richards Prize for a winning article, published in Mathematics Today: “Connecting the dots with Pick’s Theorem”. In November 2017, he was also a prize-winner in the TakeAim Competition run by the Smith Institute.

Kristian’s DPhil research is on “Modelling Removal of Sulphur Dioxide from Flue Gas”. He is modelling the operation of a purification device that converts gaseous chemicals into liquid that slowly fills up the device. His goal is to develop a microscopic model (on the level of individual pores in the device) and a macroscopic model that will predict global properties of the device such as its efficiency. More information can be found on the Mathematical Institute website.

Kristian studied MMath at ChristChurch before moving to Univ to do his DPhil on the Oxford-Radcliffe Scholarship. He has also taught Fluids and Waves (Part A course) at Univ.