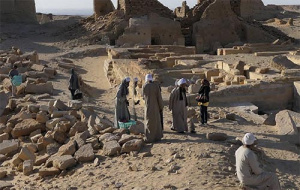 Ritual practices and their economy in an Ancient Egyptian temple

Due to the population explosion, it is becoming increasingly difficult to find solitude in Egypt, especially in places of famous ancient monuments where tourists throng alongside those who want to sell souvenirs to them. But they still exist, the places away from the hustle and bustle. One of them is Dimê, and an international team, comprised of various sub-projects, is investigating life in that town. The Univ alumnus Martin Stadler (Oriental Studies, 1997), Professor of Egyptology at the University of Würzburg, deciphers papyri from Dimê, while a Franco-German research project based at the universities of Würzburg and Bordeaux has just started working on temple bookkeeping. These projects allow us to better understand the ritual as well as economic dimensions of the cult. Professor Maren Schentuleit has worked in this same project, and in Michaelmas 2019 joined Univ as the new Lady Wallis Budge Fellow in Egyptology.

Dimê is an ancient settlement in the desert north of Lake Fayum. A large temple once dominated this place, which the Greeks called Soknopaiou Nesos – the “Island of Soknopaios”. Soknopaios, itself the Graecised form of the Egyptian Sobek neb Pai, was “Sobek, the Lord of Pai” – a local form of the crocodile-headed god. From the temple of this Sobek impressive ruins are still preserved, which serve as the remains of a building probably erected between 100 BCE and about 50 CE (Fig. 1, below). But it is not because of its architecture that the sanctuary is famous in Egyptology—even though the excavations led by Mario Capasso and Paola Davoli from the University of Salento Lecce have changed the perception of the superstructure—but because of the incredibly rich papyrus finds originating mainly from uncontrolled excavations which came to European collections at the end of the 19th century. These papyri are a treasure trove because they provide us with a wealth of information not only on everyday life but also on religion and cult at Dimê. The majority of the texts date from around 50 BCE to 250 CE.

Fig. 1 Ruins of the Temple of Soknopaios at Dimê with the excavation tent of the Missione Archeologica dell’Università del Salento Lecce 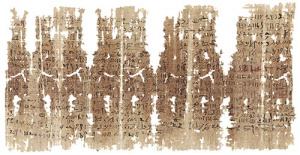 Fig. 2 Detail from the back of Papyrus Berlin P. 8043 with texts of the Daily Ritual

The architectural dominance of the temple of Soknopaios at Dimê corresponds to the institution’s ritual-religious and economic influence on the region. As in every Egyptian temple, rituals included the daily offerings and another daily ritual during which a priest dressed the cult image in fresh clothes. The texts that celebrants recited whilst performing the Daily Ritual have been preserved from the Soknopaios Temple in several demotic manuscripts from the 1st and 2nd centuries CE (Fig. 2, right). Demotic, which came into use from the middle of the 7th century BCE, is considered to be “the most evil of all evil Egyptian scripts”, as the Egyptologist Hermann Grapow once put it. The fact that these texts were written in a peculiar way, namely “unetymologically”, compounded with the often poor state of preservation of the scrolls, only compounds the difficulty in deciphering them. On the one hand, a scribe who wrote “unetymologically” wanted to encode additional levels of meaning by awakening additional associations in the reader through graphic realization, on the other hand he wanted to capture the ritually effective sound of the text. However, these unetymological writings pose enormous challenges because the decipherer cannot be sure whether the words must be taken literally or understood as syllables forming another word. Only parallels in other Egyptian texts and ritual scenes on the walls of other Egyptian temples, i.e. pictorial representations of the cult in connection with hieroglyphic captions, can help to overcome those difficulties. The effort is worth it: the Dimê version of the Daily Ritual is of general interest beyond the small circle of specialists of Demotic because it is the last testimony of these ceremonies. It sheds light on questions of how the Ancient Egyptians themselves edited, composed, and transmitted the ritual text corpus across centuries. Dimê was also in ancient times on the periphery of Egypt, but the papyri prove this place to be one which had quite good connections to the great religious and intellectual centres of the country. And finally, the manuscripts contain texts of the Daily Ritual that have not been preserved anywhere else in all of Egypt. 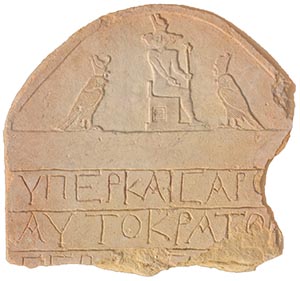 Fig. 3 The representation of Soknopaios on a stela dating to the Roman Period, excavated in Dimê in 2010

However, what the Daily Ritual from Dimê is silent about are statements about the god for whom it was celebrated. Soknopaios’ iconography plays no role, nor do his specific qualities and responsibilities or his connection to Isis, who enjoyed prominent reverence in Dimê. As for his physical strength, aggressiveness, and sexual potency—not a single word about them. This should be of no surprise, however, because the text is at least 1,400 years older than the preserved papyri themselves and  was also used in other temples, meaning that it had to be general enough to fit there too. There is also something else: Sobek is not “responsible for exactly this or that”, as is often asked for deities in polytheistic systems, but has a distinctly universal nature. He is a form of the sun god, even the solar primaeval god, who came out of the primordial water and created the world. His iconography indicates this, as can be seen on a stela excavated in Dimê (Fig. 3), which shows Soknopaios with three heads—man, falcon, and crocodile.

The religious and economic spheres are closely linked, not only because it was already the case in Ancient Egypt that “money makes the world go round”, but also because they touch each other materially, as in Papyrus Berlin P. 8043: On the front there are lists of temple accounts, on the back, another scribe wrote down the Daily Ritual. Today this is the longest surviving witness of that composition. The distribution on the papyrus is itself also remarkable: the mundane account book was written on the smooth front, the prestigious, sacred religious text, however, was later written on the back. The back of a papyrus is poorly suited to writing on because the fibres run vertically, and is usually only used once a papyrus has been left out for recycling! But running a cult was not free, and thus costs had to be cut somewhere.

Egyptian temples were therefore not only places where religion crystallized, but also economic centres, and Dimê offers like hardly any other place a rich material basis for the study of the temple economy in the Hellenstic and Roman periods of Egypt’s history. This is not least due to the fact that the bookkeeping of the sanctuary, with the “scribe of the priests” at its head, documented in detail the income and expenses of the temple treasury in several stages.

The Soknopaios temple played an important role in the local and regional economic system as a proprietor of businesses, branch shrines, and professional licenses, not to mention as an intermediary institution between craftsmen and tradesmen on the one hand, and the state administration on the other. The documents also provide an insight into the real cult activity by recording the resources needed for the maintenance of the sanctuary and the rites, their costs, origin, and quantity. This is in addition to the payment of the temple staff in money and food for their normal temple service, and their bonuses on special occasions! The largely unpublished lists of accounts thus prove to be extraordinarily rich in information.

The largest group on the sanctuary’s payroll in terms of numbers were members of the cult staff, especially the wab-priests who were organized into five teams (phylai). Each phyle consisted of about 30 men who served in the temple alternately for one lunar month each and were responsible for a large part of the cult and cult organizational tasks. In addition to monetary payments, these priests received beer, wine and oil, and on special feast days they were also given wheat.

The cult could only be carried out because the sanctuary had a variety of technical personnel. These included the breeders who took care of the rearing of the living crocodiles, the so-called holy animals, which were closely associated with the god Soknopaios.

Very often sword bearers are mentioned in the lists, who acted as bodyguards of official functionaries such as for the royal scribe (basilikos grammateus). He, of course, was not stationed in Dimê, but passed by there during inspection tours, and we know that his bodyguard received, among other things, bread and olives from the temple as food and travel provisions. Whether the early Roman iron sword found within the temple district in 2006 by the Italian excavation mission could have belonged to one of these sword bearers needs further research.

More regular issue, myrrh resin and kyphi are also listed. Similar to incense, myrrh was a component of fragrance balm used by a priest to anoint the cult statue during the Daily Ritual. However, lumps of resin could also be burned and used for incense in front of the statues of gods. Myrrh was also a main ingredient in kyphi, another incense mixture that provided a good scent and was necessary for ritual purity.

Although the lists do not reveal anything about the recipient of the incenses, Greek financial reports explain that kyphi and other aromata benefited the statue of Soknopaios as well as other deities and cost the temple almost 600 drachmas a year. By way of comparison, a six-person household’s cost of food, clothing and housing is estimated at about 1,100 drachmas per year!

The temple district of Soknopaios, which today lies so lonely in the desert, was once a busy place: every day the rituals took place before the statues of the gods within the hidden holy of holies and with the participation of only a few initiates. On the not uncommon feast days, these cult images were carried out from the interior of the temple in the presence of crowds of believers, while a large staff of employees was busy every day maintaining the administrative and economic basis for the cult and its sanctuary. Apt, then, is to say that the priests were on “cult business” in two respects!